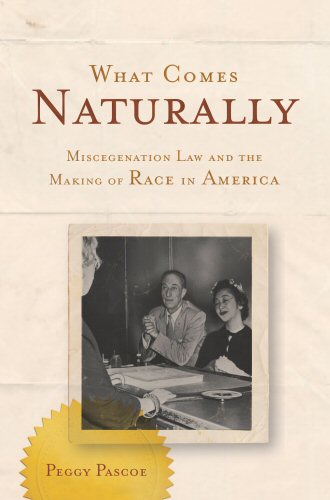 What Comes Naturally: Miscegenation Law and the Making of Race in America (Oxford University Press, 2010) by Peggy Pascoe
Fair use image

Mildred Loving always insisted she was no civil rights pioneer, but Loving. v. Virginia, the 1967 Supreme Court case that bears her name, established the legal right to interracial marriage across the United States. In memory of Mildred Loving, who died on May 2, 2008, University of Oregon historian Peggy Pascoe, author of the new book What Comes Naturally: Miscegenation Law and the Making of Race in America, discusses the many meanings of Loving v. Virginia.

When Richard Loving and Mildred Jeter decided to get married in June 1958, laws banning interracial marriage had been in effect for nearly three centuries. The colonies of Maryland, Virginia, and Massachusetts had banned intermarriage in 1664, 1691, and 1705. After the American Revolution, states passed similar laws. During the Civil War, interracial marriage acquired a new name–“miscegenation”-and miscegenation laws became the foundation for the system of racial segregation in railroads, schools, parks, and cemeteries that prevailed into the 1960s. When this regime was at its height, 30 states banned interracial marriage, many of them prohibiting whites from marrying Chinese, Japanese, Filipinos, and American Indians as well as blacks. Judges justified these laws by insisting that interracial marriage was somehow “unnatural,” a claim that became so pervasive that by 1958, 94 percent of Americans told pollsters they opposed interracial marriage.

Richard Loving and Mildred Jeter had grown up in Central Point, Virginia, a town so tiny that whites, blacks, and Indians had been mixing as far back as anyone could remember. Richard was the son of a “white” truck driver who worked for a well-off “Negro” farmer. Mildred, who said she was “part negro and part Indian,” fit into the catch-all category of “colored.” The labels “white” and “colored” carried enough weight that Richard and Mildred attended different schools and churches. Still, they knew each other even before they met at a local dance and started dating. When Richard was 24 and Mildred was 18, they decided to get married.

Richard knew they had no hope of getting a license in Virginia, so the pair traveled to Washington, D.C. to get married, returning with a marriage certificate that they framed and placed on a wall of the home they shared with Mildred’s parents. Most of their Central Point neighbors paid little attention to the marriage, but someone told the Caroline County sheriff, who vowed to put a stop to it. The newlyweds had lived together for a little more than a month when they were awakened in the middle of the night by the sheriff and his deputies, who walked through the unlocked door of the house and right into the Lovings’ bedroom to arrest them.

Their trial was held before Judge Leon Bazile, a staunch supporter of Virginia’s miscegenation law, which set prison sentences for “any white person and colored person” who left the state to get married and then returned to Virginia. Bazile imposed a one-year sentence, which he then suspended on the condition that Richard and Mildred “leave Caroline County and the state of Virginia at once and do not return together or at the same time to said county and state for a period of twenty-five years.” Effectively banished, the frightened young couple returned to Washington. D.C., where they lived for the next four years, raising three children while desperately missing their families and friends.

Mildred Loving was miserable in Washington. In 1963 she took a cousin’s advice and wrote to Attorney General Robert F. Kennedy, asking if the civil rights bill being debated in Congress might lift Judge Bazile’s restriction on living in Virginia with her husband. Kennedy sent her letter to the American Civil Liberties Union (ACLU), which asked attorney Bernard Cohen to look into the matter. Cohen and Phil Hirschkop, another ACLU lawyer, persuaded the U.S. Supreme Court, which had been avoiding the issue of interracial marriage, to hear the Lovings’ case. On June 12, 1967, the Court unanimously declared Virginia’s miscegenation law-and those of all the rest of the states, too-unconstitutional. Chief Justice Earl Warren ruled that bans on interracial marriage violated both the equal protection clause of the Fourteenth Amendment and the constitutional requirement of due process. Marriage, Warren declared, was one of “the basic civil rights.”

The Supreme Court’s decision in Loving v. Virginia was the culmination of decades of attempts to overturn miscegenation laws. Filipino immigrant men, the Catholic Interracial Council of Los Angeles, the Japanese American Citizens League, and the ACLU all played a part. The National Association for the Advancement of Colored People (NAACP), the nation’s leading force against racism in the law, blew hot and cold about interracial marriage. In 1913, the NAACP fought hard against a rash of attempts to pass miscegenation laws in northeastern states, but in the 1950s, its Legal Defense Fund (LDF) feared that any mention of interracial marriage would endanger its campaign against school segregation. In 1964, however, the LDF cast off its doubts and asked the Supreme Court to overturn a Florida law against interracial cohabitation, laying the legal path the ACLU would follow in Loving.

When Loving v. Virginia was decided on June 12, 1967, it established once and for all that interracial marriage was legal. The case spurred a significant increase in public approval of interracial marriage among both whites and blacks, and it forced even the most reluctant southern states to remove miscegenation laws from their books. It should be noted, though, that Alabama did not repeal its state constitutional ban on interracial marriage until 2000.

By then, Loving v. Virginia had become an icon of equality and an inspiration to a variety of social movements and political causes. Every June 12th, a group called Loving Day.Org sponsors celebrations of the legality of interracial marriage in cities all across the U.S. Multiracial families consider Loving the lodestone of their movement, which demands, among other things, that a multiracial category be placed in the U.S. census. Gays and lesbians invoke Loving to argue that the government has no more business using marriage to discriminate on the basis of sex than it did using marriage to discriminate on the basis of race (a position Mildred Loving herself endorsed in 2007). The Loving decision is also, and increasingly, praised by political conservatives, especially those who oppose affirmative action; they see Loving as a beacon of the colorblind ideal they have, however belatedly, decided to champion.

Richard Loving died in a car accident in 1975, but Mildred Loving lived long enough to see the changes brought by her marriage and the court case that followed. She had grown up in a world where the police, the courts, and public opinion were adamantly opposed to interracial marriage, and she had long since developed the habit of staying out of public view. Right up until her death on May 2, 2008, she denied having been a civil rights pioneer. But, of course, she was.