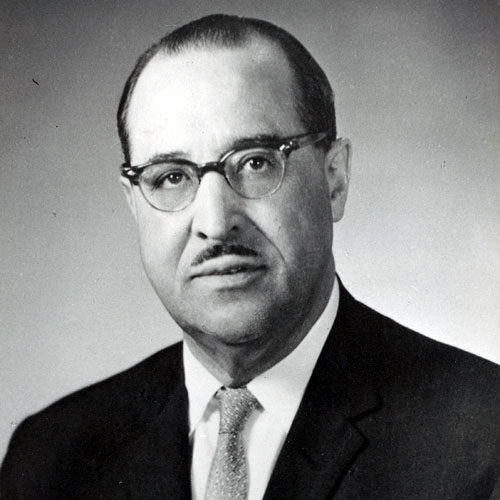 Clifton R. Wharton, one of the first African-Americans to hold a professional position in the U.S. State Department, was born in 1899 in Baltimore, Maryland. Described as a “scholastic marvel,” Wharton attended English High School in Boston, Massachusetts, skipped college and was accepted to Boston University Law School where he received a Bachelor’s degree in Law in 1920 and Master’s degree in Law in 1923. After practicing for two years in Boston he moved to Washington, D.C. in 1924 where he took a position as an examiner with the Veterans Bureau.  He later worked as a law clerk in State Department’s legal section. While there, he took an aptitude test for the position of foreign service officer, scoring in the top 15 percent.

Mr. Wharton’s 40-year career with the State Department spanned an era of profound change in U.S. foreign policy and in the bureaucracy which managed that policy.  Initially, Wharton’s career opportunities were limited to relatively insignificant posts traditionally assigned to African-American diplomats. For 25 years, he worked in Liberia, the Canary Islands, Madagascar, and the Azores in a rotation of small tropical countries known as the “Negro Circuit.”

His first break from this pattern occurred in 1949 when he was assigned to a diplomatic post in Lisbon, Portugal. The following year, he was  named consul general in Lisbon and three years later he was appointed consul general in Marseille, France. He remained there until 1957.

Wharton’s international activities were impacted by events in the United States.  In the 1950s, U.S. diplomats were often faced with international condemnation for the nation’s treatment of African-American citizens. The incident in Little Rock, Arkansas in 1957, for example, where nine young black students entering school were confronted by a mob of bigots, was a major propaganda disaster for the United States.

In 1958, President Dwight D. Eisenhower appointed Wharton as Minister to Romania, which was another major breakthrough.  Wharton at that time was the highest ranking black diplomat in the U.S. foreign service.  Then in early 1961, Eisenhower appointed him Ambassador to Norway.  This was the first time an African-American held such a post in a European nation.  Mr. Wharton’s appointments in both Romania and Norway were in part due to the government strategy of placing prominent African-Americans in international posts in an attempt to counter the ill effects of international outrage over domestic racial discrimination.

President John F. Kennedy named Wharton the U.S. representative to the North Atlantic Treaty Organization (NATO) and a delegate to the United Nations. The NATO post was also a first for African-Americans.  Wharton retired in 1964 as one of the first merit-based foreign service officers appointed to an ambassadorship.

Clifton Wharton first married Harriet Banks, an educator, social worker and community organizer, with whom he raised three sons, Clifton, Jr., William, Richard, and a daughter, Mary. They divorced sometime before 1949 and he married Evangeline Spears.  Clifford Wharton, Sr., a member of Alpha Phi Alpha Fraternity, died on April 23, 1990 in Phoenix, Arizona.  He was 90.  On May 30, 2006, the United States Postal Service issued a stamp depicting Wharton in its Distinguished American Diplomats commemorative series.