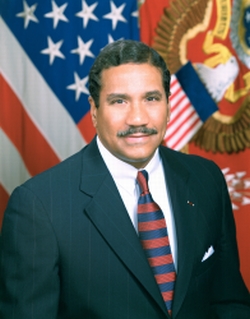 Togo D. West Jr., attorney and government official, was born on June 21, 1942 in Winston-Salem, North Carolina to Togo D. West, Sr. and Evelyn Carter West. In 1959 he graduated as valedictorian from Atkins High School in that same city.   In 1965, West enrolled at Howard University, earning his B.S. degree in electrical engineering.  He switched to law and earned a J.D. degree from Howard University Law School in 1968, graduating first in his class.  After he completed law school, West clerked for a federal judge in the Southern district of New York.

During the early 1970s, West served in the United States Army as a judge in the Judge Advocate General Corps.  For his outstanding military service, West earned both the Legion of Merit award and the Meritorious Service Medal.  Government officials recognized West’s distinguished military service and in 1973, he was appointed by President Gerald Ford as Deputy Attorney General of the U.S. Department of Justice.  In 1977, President Jimmy Carter appointed West as general counsel to the Navy and in 1979, West served as Deputy Secretary to the Secretary of Defense and general counsel to the Department of Defense from 1980 to 1981.

In September 1993, President Bill Clinton nominated West as Secretary of the Army.  After receiving Congressional confirmation, he was sworn in as the 16th Secretary of the Army.  He held this position from 1993 to 1997.   In 1998, West was appointed by President Clinton as the United States Secretary of Veteran Affairs, succeeding Jesse Brown as the second African American to hold that position.  West resigned after two years to pursue other interests.  Upon his resignation, he returned to the practice of law and then served as the president of the Washington, D.C. based Joint Center for Political and Economic Studies.

West, a member of Sigma Pi Phi fraternity, has been married since 1966 to Gail Berry West.  They have two daughters, Tiffany and Hilary.