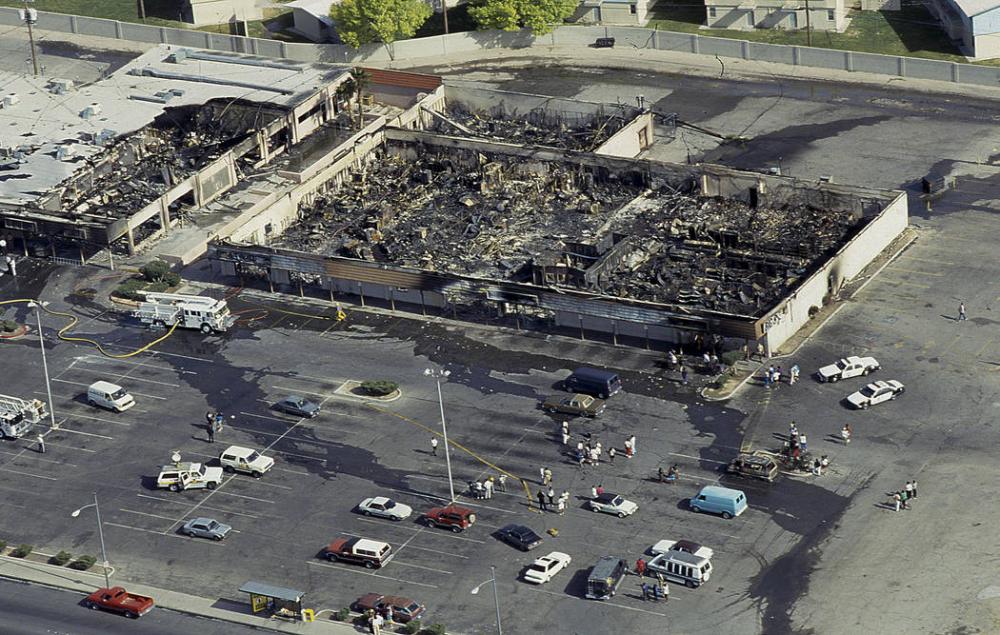 The West Las Vegas Riot occurred on April 30, 1992 in the predominantly black Westside of Las Vegas, Nevada.  The riot came a day after four Los Angeles Police Department officers were acquitted in the highly publicized beating of Rodney King the year before.  The Rodney King Riots began in Los Angeles, California the day of the acquittal and are generally far more well-known. The West Las Vegas Riots were in the shadow of the larger conflict and are nearly forgotten in history.

On April 29, 1992, the same day of the King verdict and the start of the riots in Los Angles, the city of Las Vegas was initially peaceful. Disturbances however began in West Las Vegas the next day. On April 30, black residents of the west side began to loot and burn stores and gun battles occurred at major intersections between rioters and police.

The conflict was touched off after protesters attempted a peaceful march down Fremont Street. As others joined the march, they began to engage in violence. The worst damage occurred around the Nucleus Plaza which was home of the offices of the local NAACP and a number of black-owned businesses. Looters smashed windows in stores at the mall and some threw Molotov cocktails which ignited fires. Eventually rioters destroyed the entire strip mall located at Martin Luther King Boulevard and Owens Avenue.

Rioters also attacked two police substations in Westside apartment complexes and torched a gas station located near Martin Luther King Boulevard and Alta Avenue. Fire crews and ambulances were escorted by police into the riot areas to battle blazes and carry out the injured but had to retreat due to gunfire.  Some 90 blazes were set which included both buildings and cars.  Two dozen people were injured during the riot which briefly spread to North Las Vegas.

Las Vegas Mayor Jan Jones declared a 10:30 pm curfew on the Westside which meant no one could enter or leave the area. Units of the Nevada National Guard were also called out to help patrol the streets.  On May 1, skeletal remains were found near the Nucleus Plaza grocery which were later determined to be 18-year-old Rancho High School student Isaiah Charles, Jr. His death was ruled an arson-related homicide and he was listed as a victim of the riot. Sixteen schools on the westside and North Las Vegas were closed because of the riot. Numerous businesses in the area closed as well although gun sales dramatically increased after the riot.

By May 2, the riot was declared officially over and most of the businesses reopen.  Sixty people marched from the Westside to the Las Vegas city hall in a peaceful protest, attempting to re-stage the march that initiated the rioting.  On May 4, the Las Vegas Fire Department officially assessed the damage from the riot as about $6 million.