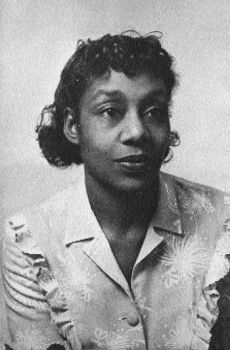 Harlem Renaissance writer Dorothy West was born on June 2, 1907 in Boston, Massachusetts.  She was the only child of Rachel Pease Benson and Isaac Christopher West.  Isaac West was a former slave from Virginia whose small-business success afforded his daughter a childhood of relative comfort.  At the age of two, West began her formal education, and by four she was admitted to the second grade at Farragut School in Boston.  At the age of seven, she discovered her love for writing. In 1921, when she was fourteen, her first story was published in the Boston Post, a newspaper for which she continued to write for the rest of her life.   She was sixteen when she enrolled at Columbia University in New York to study journalism and philosophy in 1923.  In 1926, her short story “The Typewriter” appeared in Opportunity, the journal of the National Urban League and a major literary outlet for Harlem Renaissance writers.

West put her writing on hold as she spent the next few years as an actor.  In 1927, she applied for a playwright position with the original stage production of Porgy and Bess but was offered a small role instead.  In 1929, West traveled with production to London, where the opera ran for three months.  In June 1932, she visited the Soviet Union along with other Harlem Renaissance intellectuals to film Black and White, a story about racism in the United States.  Although the film project was cancelled just before their arrival, West decided to remain in the Soviet Union for a year, returning home only after the death of her father.

West returned to Harlem and began to write again in 1934.  She was mentored by Carl Van Vechten, white writer, journalist, and music critic of the Harlem Renaissance.  Van Vechten helped her refine her writing skills and enhance her literary voice.  In the late 1930s West edited two magazines, Challenge and later New Challenge, through which she hoped to showcase young black talent.  Beginning in 1938, West worked as a welfare investigator in Harlem for a year and half and in the early 1940s became a regular contributor for New York Daily News.  In 1945, West moved to Martha’s Vineyard, where she had spent many summers as a child, and began work on her novel, The Living is Easy, which was published in 1948.  West’s novels, short stories, and periodical publications discussed African American life as well as black political and social issues.  Her experiences with racism in school, work in Harlem, and acting overseas all influenced her writing.  In 1995, West finally published her second novel, The Wedding. The novel was adapted for television and produced by entertainment mogul Oprah Winfrey as a two-part miniseries in 1998.

Dorothy West died in Boston on August 16, 1998, three years after completing The Wedding.  She is considered the last survivor of the Harlem Renaissance.