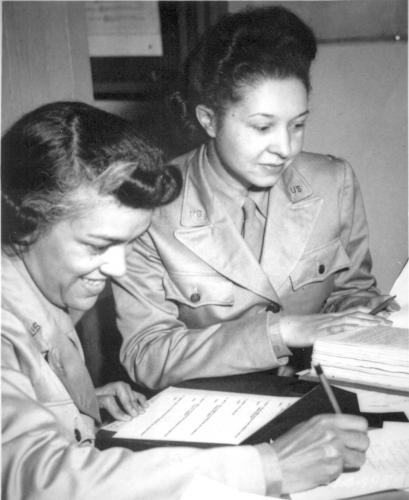 Irma Jackson Cayton Wertz was a member of the first Women’s Auxiliary Army Corps (WAACS) Officer training class commissioned at Fort Des Moines, Iowa, during World War II.  Born in Brunswick, Georgia, on May 8, 1911, Jackson was the product of a military household.  Her family was stationed in Des Moines while her father, who served as a captain in the segregated army during World War I, attended officer’s training camp.

After graduating from Fisk University and Atlanta University, Jackson moved to Chicago, Illinois where she gained employment as a social worker in the South Parkway Community Center. There she married her first husband, Horace Cayton, a noted University of Chicago sociologist. The couple divorced in 1942.

The same year, Jackson applied for entrance into the Women’s Auxiliary Army Corps.  After successfully passing a battery of examinations, completing a six-week training course, and taking the oath to become an officer in August of that year, Jackson was briefly assigned to the WAAC Headquarters in Washington, D.C. as a recruiter. Shortly thereafter, she relocated to Fort Huachuca, Arizona, where she met and married William Wertz and joined the Thirty-second WAAC Post Headquarters Company.

Under her leadership, the Thirty-second earned the highest ratings for efficiency on the military base. But Jackson encountered racial discrimination when she sought skilled positions commensurate with her abilities at the military base. In late 1943, Jackson demanded an inspection of tasks assigned to women stationed at the military post.  As a result she was promptly reassigned to Fort Lewis, Washington in 1944 and discharged from the army shortly afterward.

Mrs. Wertz relocated to Detroit, Michigan where she became a life-long active member in community affairs, serving as a volunteer with the Detroit Repertory Theatre, the Visiting Nurses Association, and the Detroit Receiving Hospital Services League.