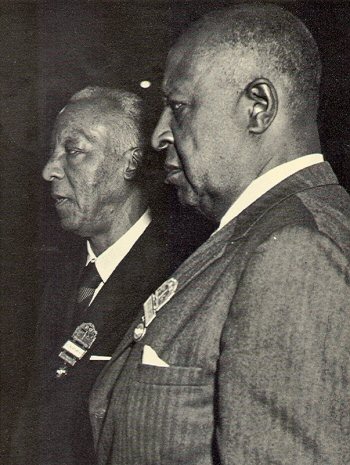 Milton Price Webster is best known as one of the founders and long-time Vice President of the International Brotherhood of Sleeping Car Porters and Maids (BSCP) Union. He helped organize the BSCP’s local in Chicago, one of the largest in the nation with over 15,000 Pullman porters in the 1930s.

Milton P. Webster was born in 1887 in Clarksville, Tennessee.  Little is known about his childhood.  He claimed his family had been chased “up north” by racial violence.  After holding a series of jobs, Webster began working as a porter for the Pullman Company in 1906, a position he would retain until 1928 when he became a full-time organizer for the BSCP.

While working for the railroad, Webster became involved in Chicago politics, supporting the black Republican machine then emerging on the city’s south side.  Webster eventually became the GOP leader of Chicago’s Sixth Ward.  In 1924, with the help of Bernard Snow, chief bailiff of the Chicago Municipal Court, Webster obtained employment as an assistant bailiff and during that time studied law. Webster also supported himself with the rents from two south side Chicago apartment buildings.

Although initially skeptical of A. Philip Randolph, the National President of the BSCP as “socialistic” and “atheistic,” Webster joined the Brotherhood in October 1925 after hearing him speak at a Chicago rally and soon became his major ally and supporter.  When Webster became the first Vice President of the BSCP one year later, he and Randolph launched a protracted campaign to make the union the bargaining representative for the porters and maids.  By 1928, when the BSCP members comprised half of the Pullman employees, the Company adamantly refused to negotiate, forcing the union to issue its first strike call.  Nine years later the company finally signed its first collective bargaining agreement with the BSCP.

In 1941, just prior to American entry into World War II, Webster supported Randolph in demanding that the defense industry be racially integrated.  Randolph’s call for a March on Washington led President Franklin Roosevelt issuing Executive Order 8802 and the creation of the Fair Employment Practices Committee.  Webster defended Randolph against BSCP members who argued that the campaign unnecessarily diverted scarce union resources into an unrelated cause.

Milton P. Webster also supported Randolph when he helped organize the 1963 March on Washington.  Loyal to Randolph and the BSCP for nearly four decades, he was designated Randolph’s successor as Brotherhood President when Randolph retired.  That transition never occurred.  In 1965 he suffered a fatal heart attack at the Americana Hotel in Bal Harbour, Florida while he and Randolph were attending an AFL-CIO Convention.