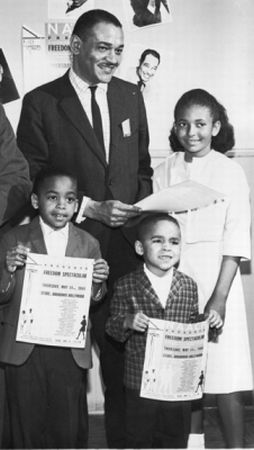 Mayfield Webb and His Children, 1965
Fair use image

Mayfield Webb, a lawyer, civil rights leader, and social activist was born on November 10, 1927 in Baltimore, Maryland. As a member of the U.S. Army, he served during the Korean War. Upon his return, he eventually attended Morgan State University in Maryland and Howard University in Washington, D.C.

In 1955 Webb moved to Portland, Oregon where he received his law degree in 1959 from the Northwestern School of Law at Lewis and Clark College. He married Juretta Lillian Oliver, who in 1950 became the first African American graduate of Providence School of Nursing in Portland.  She worked as a nurse and civil rights activist in Portland, Oregon.  The Webbs had six children.

From 1963 to 1964 Webb served as President of the Portland National Association for the Advancement of Colored People (NAACP) Chapter. As President he worked to make sure desegregation laws were enforced, often testing them with his own family.  In one example in the summer of 1963, Webb and his family entered a hotel-restaurant in the Southern Oregon community of Medford to have lunch.  After the family waited for what seemed like an unusually long period for the waitress to come to them to take their order, Mayfield and Juretta decided to sit quietly and wait.  They were finally served.

Webb recognized that Medford and nearby Ashland and Grants Pass were conservative communities with a long history of racial discrimination against African Americans.   After being reluctantly served he decided to periodically send volunteers from the Portland chapter of the NAACP to the towns periodically to “test” its motels and restaurants.  Despite his experience in Southern Oregon, Webb nonetheless considered Portland to be the area of most concern to African Americans in the state. In 1962 for example, Webb and other civil rights leaders persuaded President John Kennedy to cancel a trip to Portland because of the city’s refusal to act on housing discrimination.  In the mid-1960s Webb led efforts to desegregate Portland’s public schools.

After the War on Poverty was launched in 1965, Webb was appointed director for the Metropolitan Steering Committee, which was authorized to distribute federal funds to local anti-poverty agencies.  As director, Webb worked to improve the Model Cities Initiative, a government funded program created in response to the urban violence of the mid-1960s.  During this period Webb became increasingly disillusioned with the existing federally funded programs and instead encouraged “grass roots” organizations in the various communities to determine how the federal funds would be spent.  His controversial decision alienated both existing local anti-poverty agencies and the politicians aligned with them.

In 1968, Webb left the Metropolitan Steering Committee to work as the executive director of the Albina Corporation, an industrial corporation which provided jobs to unemployed citizens from the Albina area.  The Albina Corporation, controlled by local residents, was the type of “grass roots” Webb had promoted.  For his work with the Albina Corporation Webb was given the Albina Citizen’s Award in 1968. Nearly 20 years later in 1995, the U.S. Department of Housing and Urban Development gave him a special achievement award for his work in enhancing some of the most blighted neighborhoods in North Portland.   Webb also served on the board of directors for Goodwill Industries in Portland. Mayfield K. Webb died in Portland at the age of 68 on October 31, 1996.