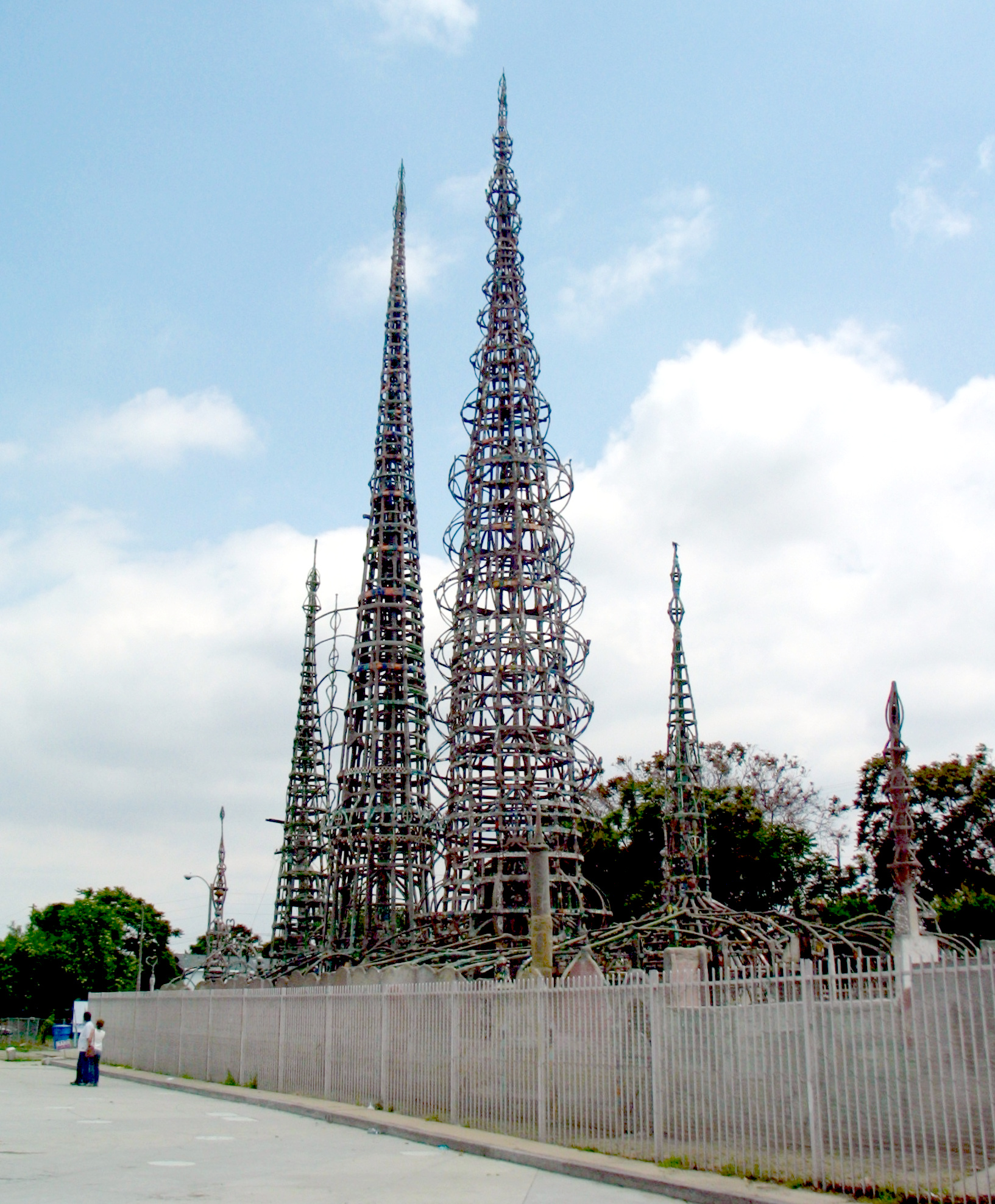 The Watts Towers are a folk art assemblage built by Simon Rodia, between the years 1921 and 1955 in the Watts neighborhood in Los Angeles, California. Rodia, an Italian immigrant, bought a modest house on a narrow, triangular lot in 1921, and immediately began the construction of the towers. In the early years of the 20th century, Watts was an integrated neighborhood that welcomed white, black, and Latino families. Rodia was known in the neighborhood because he was the only Italian. When Rodia moved to Watts in 1921, he moved in to a neighborhood that was racially diverse; 14% of the population was African-American by 1920.

The Watts Towers are comprised of 17 sculptures: three tall spires, two walls, a gazebo, many small towers, a ship, patio and other structures, which collectively make up what Rodia called Nuestro Pueblo (our town). Using miscellaneous discards, including broken dishes and bottles, tiles, pottery, rocks, seashells and even cooking utensils, salvaged from his neighborhood or at his job site, Rodia constructed the Watts Towers. The use of these items encapsulates elements of everyday American life between 1900 and 1950. Interestingly, Rodia did not use scaffolding, but built the structure to conform to his physique—everything was built within his reach and step as he used the structure itself as a sort of scaffolding. It is possible that Rodia’s artistic imagery may have been influenced by exposure to the great ceremonial towers paraded in his childhood hometown of Nola, Italy during a festival held annually to celebrate the liberation of Nola’s Bishop Santo Paulinus from North Africa.

Jazz legend Charles Mingus grew up only a block away from the towers and watched Rodia build portions of the sculptures only to remove and rebuild them. Mingus and other children in the neighborhood would bring empty bottles to Rodia to add to the towers. Mingus related the towers to the impulsive, yet meticulously structured music he played. Like jazz, the towers were a symbol of freedom and transcendence.

At the age of 76, in the mid 1950s, Rodia moved from the Watts Towers site. When he moved, he left a neighborhood that was vastly different that the Watts of 1921. During World War II, Watts became a quickly-planned urban sprawl, which included for the first time major industrial plants. African-Americans from the south moved in, seeking jobs in the burgeoning industries. By 1960, the community was about 90% African-American.

The city of Los Angeles threatened to demolish the towers in 1959, but was met with highly publicized demonstrators who wished to preserve the towers. In 1963, the towers were declared to be a historic monument and were listed on the National Register of Historic Places.

On Friday, August 13, 1965, the Watts rebellion began. Amazingly, the Watts Towers survived the rebellion, unscathed amid the vast destruction of the surrounding neighborhood. To the Watts residents, the Towers became a symbol of freedom and individual initiative.

The City of Los Angeles acquired the property on which the Watts Towers stand on October 24, 1975 and funded Watts Towers Arts Center. The Arts Center gives tours to the public as well as visiting schools, lectures, and two annual Heritage Festivals, which attracts a diverse audience.