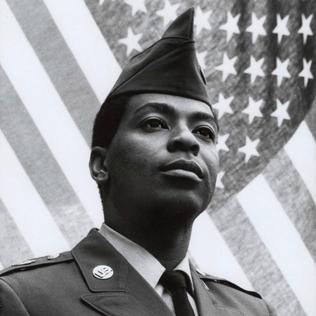 Perry James Henry Watkins was the only openly gay person discharged from the U.S. Army with full honors after serving almost two decades.  He had to fight for this distinction, suing the Army after being forced out because of his sexual orientation.  The case went all the way to the Supreme Court.

Ola Watkins gave birth to Perry on August 20, 1948, in Joplin, Missouri.  Perry’s parents divorced when he was only three.  When in junior high, his mother remarried a career military man, and they moved to Tacoma, Washington.  Throughout high school in Tacoma, Perry took dance classes, even studying at the Tacoma City Ballet.  He later earned a BA in business and theater.

Watkins’ mother influenced him strongly.  First, she accepted her son’s sexual orientation.  Her emphasis on honesty played a key role in his embracing that orientation throughout his Army career.  Watkins knew growing up that he was gay.  If peers asked him, he answered truthfully. He considered the racism directed against him far more prominent than the homophobia.

In 1967, during the Vietnam War, Watkins received his draft summons.  He marked “yes” on his inductee questionnaire when asked about “homosexual tendencies.”  The Army responded by sending him to a psychiatrist who interrogated Watkins about his sexuality but also asked if Watkins had a problem serving his country.  Watkins answered, “No problem.”  Consequently, his military career as an openly gay man began in May 1968.  Several times in those early years he tried to leave the military due to his sexual orientation after hearing that the Army dismissed several white gay peers for that reason.  The military, however, denied Watkins’ requests.  He surmised that the primary reason for this differential treatment was his race.

Watkins’ first two years in the Army came to a close in 1970.  When realizing that he needed financial assistance for college, he reenlisted.  Again, he honestly answered the homosexuality question and again, the Army accepted him.  Watkins served twice in Korea in the early 1970s.  During this period he signed up to entertain the troops using his female impersonator role, Simone, and performed in Army clubs in Germany and throughout Europe.  Watkins received several commendations during his years of service.

In 1975, without warning, Watkins’ commanding officer started proceedings to discharge him.  A hearing was held in October of that year beginning a four year long administrative process to remove him.  Watkins, however, now fought these charges.  In 1979, his military-clearance renewal was rejected due to his gay status.  Two years later he sued the Army, which responded by discharging him for being gay.

That the Army had earlier accepted Watkins’s sexual orientation early in his career and then later removed him for it, became the center of his nine year legal challenge, which was decided in 1990 by the U.S. Supreme Court.  The Court rejected the Army’s argument and ordered him to be reinstated with back pay, retirement benefits, and retroactive promotion to Sergeant First Class.  Watkins was then honorably discharged from the U.S. Army in 1990

In his last years, Perry James Watkins lectured throughout the United States on his military experiences. He died from AIDS-related complications in Tacoma on March 13, 1996.