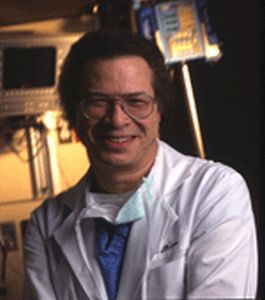 Dr. Levi Watkins Jr. was a cardiac surgeon who, in 1980, performed the first implantation of an automatic defibrillator into a human heart. He was also a professor of cardiac surgery and associate dean at the Johns Hopkins School of Medicine in Baltimore, Maryland.

Watkins was born in Parsons, Kansas, but grew up in Montgomery, Alabama. He attended the First Baptist Church, and became close friends with the Pastor, Dr. Ralph David Abernathy. He later attended the Dexter Avenue Baptist Church, where he met Dr. Martin Luther King, who had recently begun preaching there. Inspired by King, and dismayed at the prejudices of Jim Crow Alabama, Watkins became involved in the civil rights movement. He joined the King-supervised Crusaders youth group and drove parishioners to the church in a station wagon so they could boycott the city’s segregated bus system in 1956.

Watkins entered Tennessee State University in 1962. He eventually became president of the student body, majored in biology, and graduated with honors in 1966. That May, he became the first African American admitted to the Vanderbilt School of Medicine in Nashville. Studying at Vanderbilt was a lonely, isolating experience, and when King was murdered in 1968, Watkins was still the only black student at the school. Despite the prejudice he encountered there, he in 1970 became the first African American to graduate from Vanderbilt.

Later that year Watkins moved to Baltimore, where he became the first black intern at Johns Hopkins University Medical School. Between 1973 and 1975, he studied at Harvard Medical School’s Department of Physiology, performing breakthrough research into the role of the renin angiotensin system in congestive heart failure. When he returned to Johns Hopkins in 1975, he became the first black chief resident in heart surgery at the university.

Watkins performed the first implantation of an automatic defibrillator in February 1980. Joining a team working on the device that included Michel Mirowksi, Morton Mower, and William Staewen, and assisted by Dr. Vincent Gott, the chief of cardiac surgery, Watkins performed the operation on a 57-year-old woman from California at Johns Hopkins Hospital. The defibrillator is a small, battery-powered device that detects arrhythmia in the heart and emits an electric shock to correct it. Since that operation, it has saved more than one million lives.

Watkins had also been selected to join the medical school’s admissions committee, where he focused on correcting racial inequality in the student body. He was so successful that by 1983, black students in the Hopkins Medical School had increased fivefold to 40 compared to the eight students there in 1978.

Watkins was promoted to full professor of cardiac surgery in 1990.  He was awarded a medal of honor as an outstanding alumnus by the Vanderbilt school, and has been given honorary doctorates by Sojourner–Douglass College, Meharry Medical College, Spelman College, and Morgan State University. In April 2010, he was awarded the Thurgood Marshall College Fund award for excellence in medicine.