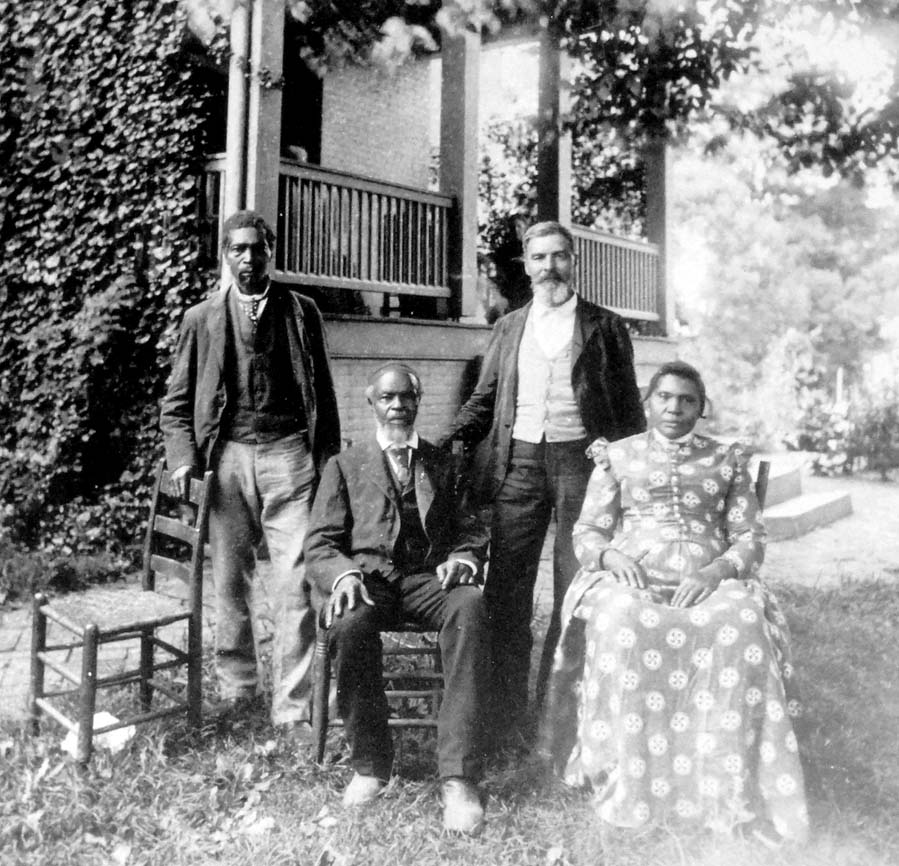 In the following account author, historian, and genealogist John F. Baker, Jr. describes the multi-year search for his enslaved ancestors which resulted in his 2009 book, The Washingtons of Wessyngton Plantation: Stories of My Family’s Journey to Freedom.

When I was in the seventh grade, I spotted a photograph of four former slaves in my social studies textbook.  Although the photograph was entitled Black Tennesseans, I noticed a strong family resemblance between them and my family members. When my grandmother told me that two of them were actually her grandparents, I began the lifelong research project that became The Washingtons of Wessyngton Plantation: Stories of My Family’s Journey to Freedom.

I tell the story of my ancestors Emanuel and Henny Washington, who were enslaved on Wessyngton Plantation owned by the Washington family.  This is also the story of the hundreds of other African Americans connected with the plantation for more than two hundred years. It is a story of family, faith, and community.

Founded in 1796 by Joseph Washington, a distant cousin of America’s first president, Wessyngton Plantation covered 15,000 acres in Robertson County and held an enslaved population of 274 African Americans. They comprised the largest enslaved population on a single plantation in the state of Tennessee and they worked on the largest tobacco plantation in the United States and the second largest in the world.

During the Civil War many African American men from the plantation enlisted in the Union Army, others ran away and worked on the military fortification, Fort Negley, in Nashville.  After the emancipation in 1865 many of the freedpeople returned to Wessyngton as sharecroppers.  Others purchased their own farms including several who bought land on which they had previously been enslaved.  Some of this land remains in their descendants’ possession.

Only two slaves were ever sold from Wessyngton Plantation so the African Americans there formed family groups that remained intact for generations.  Many of their descendants still remain in the area close to the plantation, others now numbering in the tens of thousands live throughout the United States.  Some of the African Americans on Wessyngton also retained true African names, which was very rare for that period.  This has made it possible to trace their African ethnic group heritage, which has been confirmed by DNA testing.

I first heard of DNA testing in regard to the controversy between the descendants of President Thomas Jefferson and Sally Hemings in 2001. After learning about the use of DNA to trace African lineages, I decided to employ this new technology for the Wessyngton families whose present-day descendants I could trace.

The Wessyngton DNA project which began in 2003, included descendants from several branches of Wessyngton enslaved families who were brought there from the late 1790s through the early 1800s.  Descendants of the Terry family who arrived in 1838, the Gardner family the following year and the Lewis family who came in 1843, were all tested as were the Scott, Green, Cheatham, and several other plantation families.

Participants in the Wessyngton DNA project included eleven men and seven women. Many of the families have multiple lines originating at Wessyngton. Most of the participants live in Tennessee within a short radius of the Wessyngton plantation; others live as far away as California.

In 1964 the Washington family deposited the plantation’s records in the Tennessee State Library and Archives in Nashville.  These papers are remarkable in their content and include birth registers of slaves from 1795-1860, slave bills of sale, letters, diaries, lists of slaves in the Union Army, food and clothing allocations, inventories, tax records listing the names of slaves and much more.

These records known as the Washington Family Papers have been my primary source of research. In the course of more than thirty years of research, I have viewed nearly seventy rolls of microfilm to unravel my ancestry and the other Wessyngton families.  I have also used public records such as wills, deeds, census records, marriage records, court records, death certificates, minute books and Freedmen’s Bureau documents from Virginia, Kentucky, North and South Carolina to research the genealogies of Wessyngton families.

In addition to collecting information from my own family members, I have interviewed more than twenty-five children and grandchildren of former Wessyngton slaves (ranging in age from 80 to 107).  They shared many accounts of life on the plantation told by their ancestors who were enslaved there.

One of the people I interviewed was Mrs. Ann Nixon Cooper, who is now 107 years old.  In 2008 Mrs. Cooper became part of American history.  After CNN television news chronicled her voting early in the presidential election, Senator Barack Obama telephoned her.  At the conclusion of his historic election night speech on Tuesday, November 4 as the first African American president-elect of the United States, he drew on her life as representative for all African Americans, and indeed all Americans.

The last lines of President-elect Obama’s speech brought Mrs. Cooper’s story into the future as well, when he wondered aloud what our children and his own would experience if they lived as long as Mrs. Cooper.  "What change will they see?, he asked the audience, "What progress will we have made?"

Descendants of the plantation owners were crucial in this ongoing research of the plantation’s history.  Many of them shared their remembrances, as well as photographs and portraits of former Wessyngton slaves.

Research on the Wessyngton families has yielded hundreds of photographs and portraits of African Americans who were once enslaved on the plantation.  The Washington family commissioned portraits of several former slaves at the end of the nineteenth century.  Portraits by Maria Howard Weeden hung in prominent places in the Wessyngton mansion and in Washington Hall and Glenraven, the plantation homes of some of the Washington children.  Weeden painted one portrait from an 1849 photograph of Henny Jackson Smith who was the servant of George A. Washington’s wife, Jane Smith and who lived on the Forks of the Cypress Plantation in Florence, Alabama.  Alex Haley’s ancestors were enslaved on that plantation and the subject of his book Queen.  Weeden painted two portraits of my ancestor, Emanuel Washington (1824-1907).  Wessyngton slaves and their descendants used a 200-grave slave cemetery on the plantation up to the late 1920s.  In 1995 descendants of the plantation owners erected a monument there to memorialize it.

When the Washington family sold Wessyngton Plantation in 1983, it was the largest farm in America owned by direct descendants of the original founder. Wessyngton Plantation, listed on the National Register of Historic Places, is still a working farm. The mansion, built brick by brick by its slaves, still stands as does a slave cabin.  A slave cemetery is nearby. Today hundreds of Wessyngton descendants throughout the country visit the plantation to learn more about their ancestors’ lives.

Research into my family’s past has been a groundbreaking work of history and a deeply personal journey of discovery. The Washingtons of Wessyngton Plantation is an uplifting story of survival and family; it honors the memory of our ancestors, their struggles and their achievements.