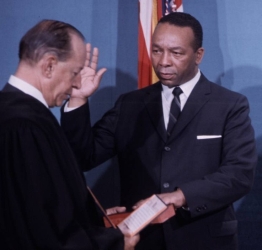 Walter Washington Sworn in as Mayor of Washington D.C., 1967
Fair use image

Walter Edward Washington, attorney and politician, was born in Dawson, Georgia, on April 15, 1915 to Willie Mae and William L. Washington.  After his mother’s death in 1921, Washington moved with his father to Jamestown, New York.  Washington excelled academically and athletically in the public school. His trumpeting skills in school also earned him the nickname Duke II.   In 1934, he enrolled at Howard University in Washington, D.C.  Washington earned his B.A. degree in 1938 and his law degree from the same institution in 1948.  While attending law school, Washington met and married Benetta Bullock.

During his tenure as mayor, Washington implemented a model of using private businesses to fund public ventures. He also integrated the higher ranks of the D.C. police department.  This initiative led to the hiring of the District’s first African American police chief.  Washington also advocated and received home rule for the District.  This political achievement gave residents the right to vote for their leadership in 1973 and following year residents elected him to the office of mayor.

Political colleagues and his constituents also praised Washington for his work ethic and ability to reach out to the people of the District of Columbia.  He became known as the “walking mayor” because he walked through district neighborhoods to hear the concerns of residents.

After losing a re-election bid to Marion Barry in 1978, Washington retired from the D.C. political scene.  He then moved to New York City where he practiced law and remained active in political and legal circles.  During his lifetime, Washington received numerous honorary degrees from institutions such as Fisk University and Princeton University.  Washington’s first wife passed away in 1991 and he married Mary Burke.

On October 27, 2003, Washington passed away at the age of 88.  He is survived  by his daughter from his first marriage, Benetta.