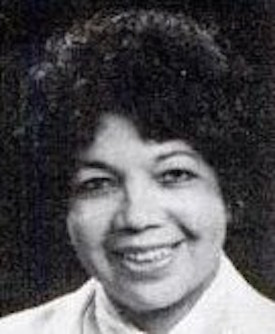 Ruth V. Washington, a lifelong Republican, was appointed by President George Herbert Walker Bush as U.S. Ambassador to Gambia on November 21, 1989.  Washington was a rare “political” appointee, meaning she was not a member of the U.S. Foreign Service for years before landing her appointment. In fact, President’s Bush’s brother Jonathan Bush, a New York lawyer, recommended her for the ambassadorial post.

Despite having no background in the Foreign Service, Washington saw her appointment as an opportunity to enlist U.S. businesses and leading universities in the effort to address Gambia’s poverty and limited infrastructure development.  Unfortunately Washington never got the opportunity to pursue these initiatives.  She died in an auto accident on January 20, 1990, near her home in Greenburg, New York, at the age of 69.  While her appointment was confirmed by the U.S. Senate, she never had to opportunity to present her credentials to the Gambian government.

Born in Buffalo, New York, Washington graduated from Hunter College in New York City (B.A., 1944) and New York University Law School (LL.B, 1947; J.D., 1968) where she was one of two women in her law school. She also attended New York University School of Business Administration and continued her professional development in education and religion at Columbia University.

Washington’s career included both legal and political appointments in city, state, and national governments.  After completing law school Washington served initially as a probation officer for the City of New York before quickly being appointed as the supervisor of female probation officers.  In the early 1950s she ran unsuccessfully as a Republican candidate for the City Council of New York.  Although her candidacy was endorsed by the New York State Liberal Party and El Diario, the largest Spanish-language newspaper in the city, she never again ran for public office.

From 1961 to 1963 she held both state and national appointments.  She was a litigation attorney for the U.S. Dept. of Labor Solicitor Office and Associate Counsel for the State Division of Human Rights (1961-1963).  Secretary of Labor Peter J. Brennan named her as Commissioner of the New York State Workers’ Compensation Board (1968-1974).  In this position she heard and determined claims and appeals supported by the Longshoremen and Harbor Workers Compensation Act of 1927 and the Health and Safety Act of 1969. In addition she was chairwoman of the benefits Review Board of the U.S. Department of Labor (1974-1977).  Beginning in 1970 she was a member of President Richard Nixon’s Advisory Council on Economic Opportunity and the Economic Role of Women.

From 1979 to 1987, Washington was the Magistrate for the Southern District of New York, arguably the busiest district in the nation in terms of litigation. At the time only one other woman of color served in a similar capacity across the United States.  Washington was an attorney at a private law practice in New York from 1977 to 1979, Adjunct Professor at New York’s Fordham University beginning in 1987 and arbitrator for the New Jersey Mediation Board (1989).