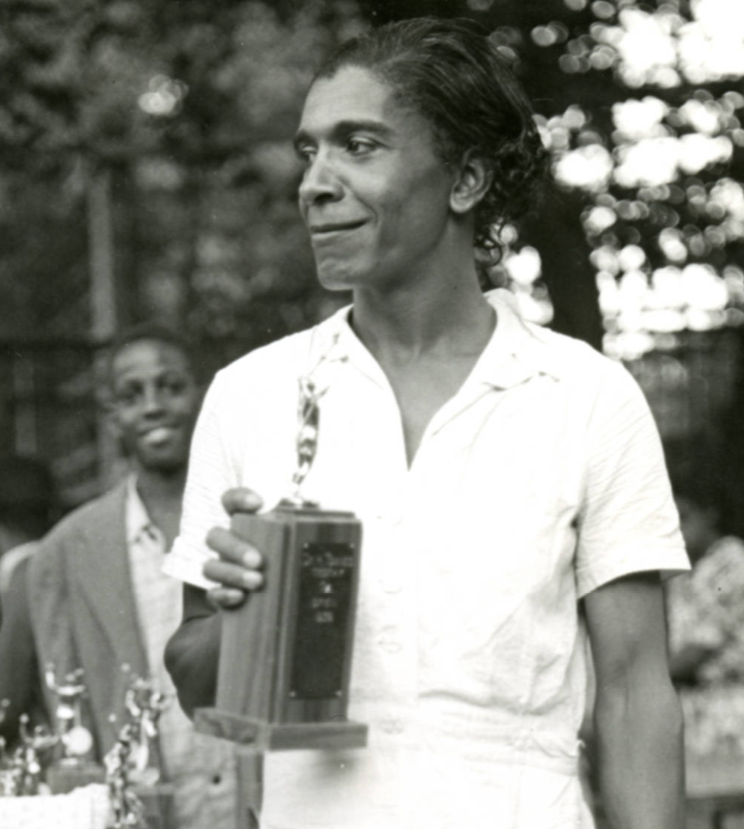 Ora Mae Washington was the first prominent African American athlete to dominate two sports, tennis and basketball.  Born on January 23, 1898, in Caroline County, Virginia, she was the daughter of James “Tommy” and Laura O. Young-Washington.   Washington’s family moved north in search of opportunity around 1912 and settled in the Germantown section of Philadelphia, Pennsylvania.

Washington began playing organized sports competitively when she was 25 years old.  She chose to play tennis at the Germantown YWCA, at the suggestion of an instructor who was trying to console her after her sister passed away. Washington won her first national tournament in 1925, and her first national championship within a year of picking up the racket. Tennis as a sport was racially segregated and thus Washington competed only against other African Americans. In response to the USTA ban on black players in their tournaments, a group of African American businessmen, college professors, and physicians founded the American Tennis Association (ATA) in Washington, D.C. on November 30, 1916. The ATA is the oldest black sports organization in the United States.

In her first five years, Washington won numerous titles, and she held the ATA national title from 1929 to 1936. Washington continued to play up until the late 1940s, where she added 12 doubles titles, winning her last doubles title at 46 years old, and three mixed doubles championships to her already impressive trophy case.

Tennis remained racially segregated, however, and Helen Willis Moody, considered the best white tennis player during that era, refused to play Washington. Her achievements were noticed by President Franklin Roosevelt who steered New Deal funds toward the building of tennis courts in urban areas.

While most athletes would be satisfied dominating one sport, Washington added basketball to her athletic resume.  She was the starting center for the Germantown Hornets, where she helped the team post a 22-1 record and win the female national title in 1930. She joined the Philadelphia Tribunes in 1932, then one of the most dominant women’s sports teams in basketball history and remained with them for ten years.  The Tribunes were sponsored by the city’s oldest black newspaper, the Philadelphia Tribune.  Although the Tribunes opponents were mostly black teams, occasionally they were matched against white teams. Washington led the Tribunes in scoring, and had a brief stint as the head coach.  While she was with the team they won ten straight Women’s Colored Basketball World Championships.  At one point, Washington was called “the best Colored player in the world.”

Washington had a 12 year period where she was undefeated in tennis and she earned 201 trophies for both tennis and basketball. Unlike today, where star athletes are paid high salaries, Washington was forced to work as a domestic during her entire playing career.  After retiring from major competition in 1948, she purchased an apartment complex which helped her live comfortably as she got older.

Ora Mae Washington died on May 28, 1971, in Philadelphia. She was 73.  Five years later she was inducted into the Black Athletes Hall of Fame in 1976.

Washington was also inducted into Temple University’s Sports Hall of Fame in 1986, and in 2009 she was elected to the Women’s Basketball Hall of Fame, located in Knoxville, Tennessee.