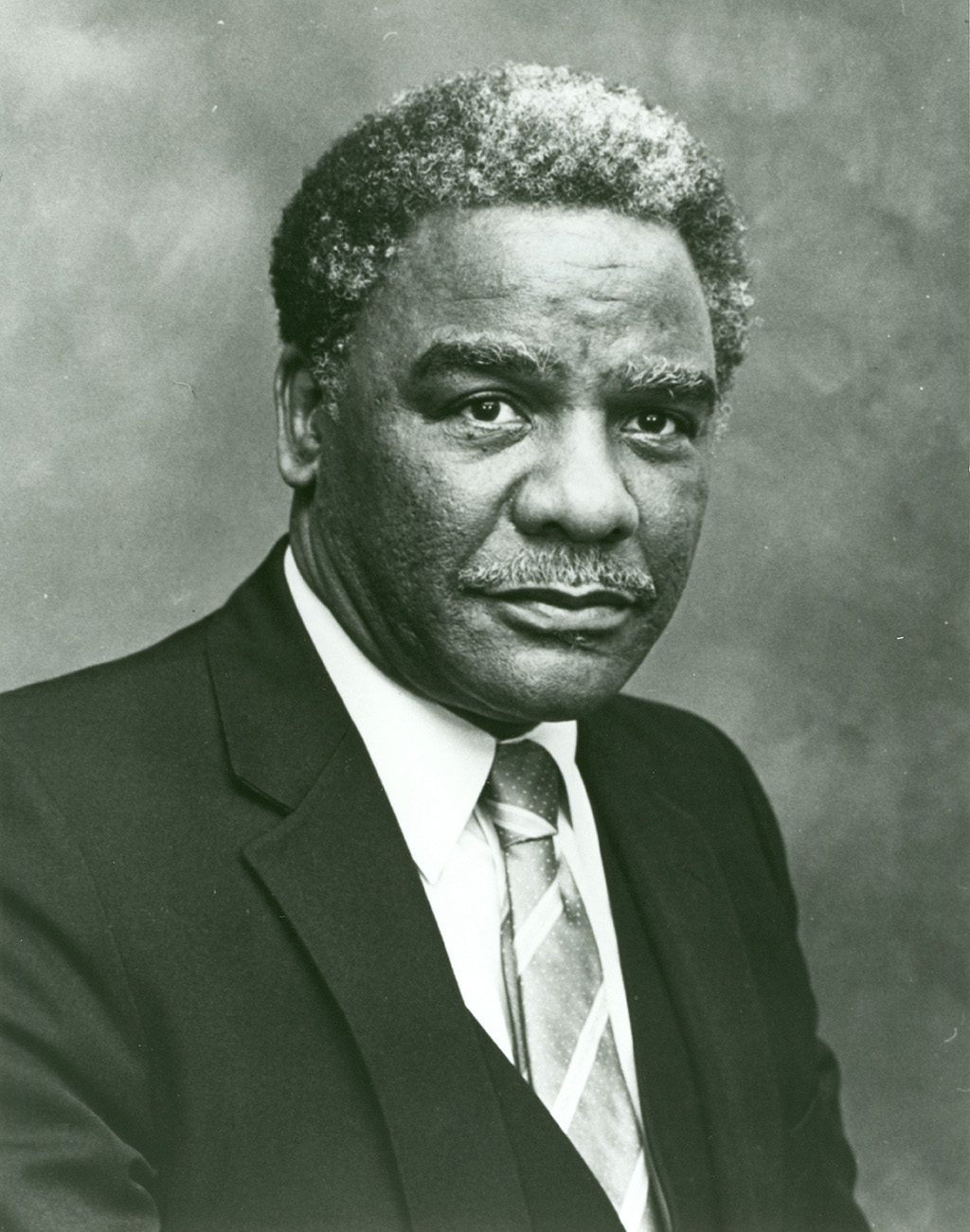 Harold Washington, the first African American mayor of Chicago, Illinois, was born on April 15, 1922, to Roy Washington, a lawyer, Methodist minister and one of the first black precinct captains in Chicago.  Washington’s mother Bertha Washington was a well-known singer in the city.

Washington attended segregated public schools including the newly completed DuSable High School where he set records as a track star.  Despite that success, Washington dropped out of high school at the end of his junior year and worked in a meatpacking plant until his father helped him obtain a job at the U.S. Treasury office in Chicago.  There he met Dorothy Finch, his future wife.  The couple married in 1941 when Harold Washington was 19 and Dorothy was 17.  They divorced ten years later.

In 1942 Washington was drafted into the U.S. Army and sent overseas as part of a segregated unit of the Air Force Engineers, then part of the U.S. Army.  Washington served three years in the South Pacific and rose to the rank of First Sergeant.

After leaving the Army in 1945, Washington returned to Chicago and received his B.A. from Roosevelt University in 1949.  He earned a J.D. from Northwestern University’s School of Law in 1952 where he was the only African American in his class.  Washington was admitted to the Illinois bar and began practicing law in Chicago. He also served in the city corporation counsel’s office as an assistant prosecutor from 1954 to 1958.  Beginning in 1960, he served for four years as an arbitrator for the Illinois State Industrial Commission.

Although Harold Washington had worked for 3rd Ward boss and former Olympic athlete Ralph Metcalfe since 1951, he became a candidate for office for the first time in 1965, winning a seat in the Illinois House of Representatives where he served until his election to the State Senate in 1976.  Although a protégé of Metcalfe, who was part of the political machine of Chicago Mayor Richard J. Daley, Washington occasionally challenged the machine. For example, in the late 1960s when he supported Renault Robinson, a black police officer who founded the Afro-American Patrolmen’s League to protest discrimination against black officers and police brutality.

In a special election held in 1977 to determine the successor to Chicago Mayor Richard Daley who had recently died, Washington finished third in a field of four contenders for the Democratic nomination.  In March 1980, Washington won the Democratic Primary over incumbent Congressman Bennett Steward and ran unopposed in the general election.

Shortly after his reelection to Congress in 1982, Washington began his second campaign for mayor of Chicago.  He won the hotly contested Democratic nomination in February 1983 against incumbent Mayor Jane Byrne and Richard M. Daley, the son of the late mayor.  Normally the Democratic nominee for the office of mayor receives token opposition from the Republican Party but Washington’s primary victory over the Democratic political machine led to much of the organization supporting Bernard Epton, the GOP candidate in the general election.  After an unusually contentious campaign that attracted national attention, Washington won the office of mayor on April 12, 1983.  On April 30, Washington resigned his seat in the House as he was sworn in as Mayor of Chicago.

Much of Washington’s first term in office was marred by conflicts with the Chicago City Council, still controlled by the political machine, which blocked much of his reform agenda.  Consequently Washington often vetoed legislation passed by the 50-person City Council.  He also forged a coalition of reform-minded African American, Latino, and white aldermen.  In 1986, when Washington’s supporters won a one-vote majority on the City Council, his legislative agenda was finally considered.

On February 24, 1987, Harold Washington again defeated Jane Byrne to win the Democratic nomination for mayor.  The Democratic machine, weakened by defections to Washington and political corruption scandals, did not challenge Washington’s reelection and he easily won the general election in November.  On November 25, nine months after his primary win which guaranteed a second term, Harold Washington had a heart attack in his office and died at age 65..