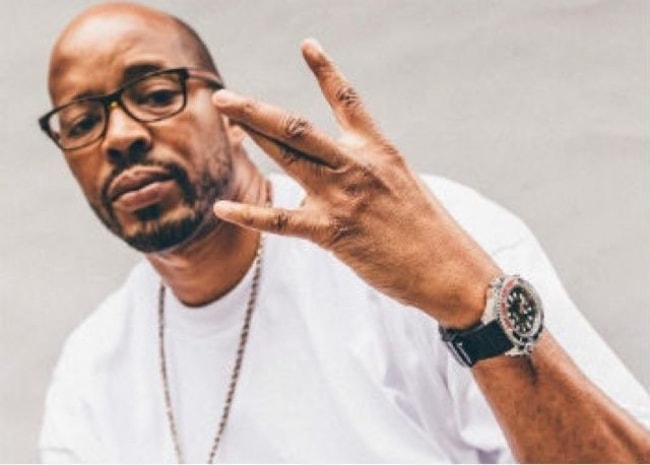 Rapper, DJ, singer, songwriter, and record producer known professionally as Warren G was born Warren Griffin III on November 10, 1970, in Long Beach, California. His mother, Ola, was a dietician, and his father Warren Griffin Jr was an airplane mechanic and former US Navy cook. The couple divorced in 1974 and Griffin then relocated to East Long Beach with his mother and three sisters. In 1982, Griffin was sent to live with his father, stepmother, Verna, and her three children from a prior marriage, in North Long Beach. He attended Jordan High School, where he played football and ran track.

Griffin’s half-brother, Andre Young aka Dr. Dre, taught him how to use the drum machine and encouraged him to focus on writing and producing music. Shortly after graduation from Jordan High in 1988, Griffin began working at the Long Beach Shipyard and formed the rap group 213 with friends Nathaniel “Nate Dogg” Hale, and Calvin “Snoop Dogg” Broadus, two years later in 1990. Nate Dogg and Snoop Dogg quickly signed with Death Row Records, while Griffin signed with Def Jam Records.

Griffin co-wrote and performed with Nate Dogg the single “Regulate” for the movie Above The Rim (1994). The single was extremely successful and has since been certified multi-platinum after selling over seven million copies worldwide. Griffin was nominated for several awards and won the 1995 NME Award (New Musical Express) for Best Rap Artist. He used the single as his lead for his first album, Regulate…G Funk Era (1994), which sold over two million copies.

Griffin made his film debut in the documentary The Show (1995). His second album, Take A Look Over Your Shoulder (1997), and his third album I Want It All (1999), were released under his own record label, G Funk Entertainment in cooperation with Def Jam Recordings. Both albums were certified gold after each sold over half a million copies worldwide. Griffin’s fourth album, The Return of The Regulator (2001), was released with Universal Records, his fifth album In the Mid-Night Hour (2005), was released on Hawino Records, and his sixth album The G Files (2009) was released on Koch Records.

After the death of Nate Dogg in 2011, Griffin took a long break from the studio. He remained involved in other projects, appearing in television shows and in films, and lent his voice to several video games. Griffin released his five track EP Regulate…G Funk Era, Part II, in 2015, under his own label. Throughout his career, Griffin has had quite a few run-ins with the law. At age 17, he was briefly jailed for gun possession. He was later arrested for selling drugs, possession of marijuana, and was questioned in 2015 about a 20-year-old shooting incident. In 2019, Griffin released his “Sniffin Griffin” barbecue sauce and rubs, in honor of his late father. Warren Griffin and wife, Tenille, have four children.