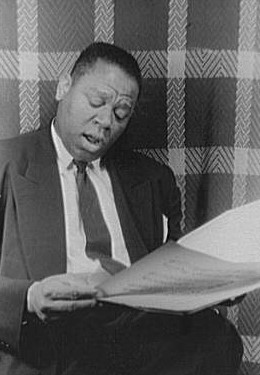 Concert bass-baritone singer, actor, and teacher William Caesar Warfield was born on January 22, 1920 in West Helena, Arkansas to a family of sharecroppers. When Warfield was a young child, his family moved to Rochester, New York, where his father served as a pastor for Mt. Vernon Baptist Church in that city.

In 1950, at the age of thirty, Warfield debuted in New York’s Town Hall.  He won rave reviews for his performance and that same year he began a concert tour of Australia. A year later, Warfield returned to New York where he sang the role of Joe in Oscar Hammerstein’s musical Show Boat.  In 1952, Warfield performed in George Gershwin’s Porgy and Bess during a U.S. State Department sponsored tour of Europe. While on tour, Warfield met and married his wife, opera star Leontyne Price.  He also made concert tours of Africa, the Middle East, and a repeat tour of Europe in 1956.  He then performed in Asia in 1958.  Throughout his career Warfield visited six continents, earning the unofficial title of “America’s Musical Ambassador.”

Warfield also appeared in various film and television projects. He reprised the part of Joe in MGM’s 1951 color remake of Show Boat and played the character De Lawd in the 1951 Hallmark Hall of Fame live television production of the controversial Marc Connelly play The Green Pastures.

In 1974, Warfield and his wife Leontyne Price divorced.  That same year he accepted a teaching position at the University of Illinois. In 1984, Warfield was elected the president of the National Association of Negro Musicians, a position he held until 1990.  In 1996, Warfield became involved with the controversial Schiller Institute founded in 1984 in Wiesbaden, Germany by Helga Zepp-LaRouche, the wife of American political activist Lyndon LaRouche. There he worked with acclaimed vocal coach, Sylvia Olden Lee, on a project to preserve the tradition of the Negro Spiritual. He also taught voice training master-classes at Schiller.

In 1999, the singer joined forces with fellow baritones Robert Sims and Benjamin Matthews to form the “Three Generations” trio.  William Warfield passed away on August 25, 2002 in Chicago, Illinois. Warfield’s legacy lives on in the form of the William Warfield Scholarship Fund which continues to give money to young African American classical singers to pursue their studies at the Eastman School of Music.