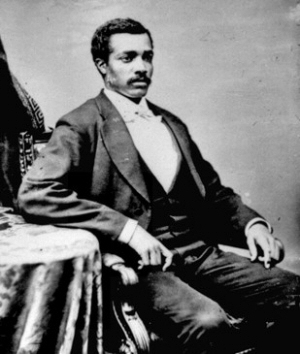 First elected to the Congress in 1870, Josiah T. Walls became Florida’s first elected African American congressman. Walls was born a slave in Winchester, Virginia on December 30, 1842.  He was conscripted by the Confederate Army and captured in Yorktown by Union forces in 1862.  Walls then enlisted in the U.S. Colored Troops Infantry Regiment in 1863, where he rose in rank to First Sergeant.  Prior to his discharge from the army in 1865, Walls married Helen Ferguson of Newnansville, Florida.

After leaving the U.S. Army, Walls settled in Alachua County, Florida and became active in local politics.  After passage of the U.S. Military Reconstruction Act of 1867, Walls joined the newly formed Republican Party in Florida.  He was an elected delegate to the 1868 state constitutional conventions and shortly afterward was elected to the lower house of the state legislature in 1868.  He advanced to the state senate representing the 13th District, which was mostly Alachua County, in 1869.

Walls’s six-year tenure as a U.S. Congressman was filled with controversy. He was the only black representative unseated three times by opponents challenging his elections in 1870, 1872, and 1874 including J.J. Finley, a former Confederate general. Despite these disputed elections, Walls compiled a legislative record which included introducing bills favoring land grants to railroads and securing connections to ports servicing Cuba and the West Indies. Walls also submitted measures to reinforce the Civil Rights Act of 1866. After serving in Congress he returned to the Florida State legislature and resumed farming on his 175 acre plantation near Gainesville, Florida that he had acquired in 1873.  Walls also purchased a newspaper, The New Era.  Walls remained active in politics serving at various times as mayor of Gainesville, a member of the County Board of Public Instruction and County Commissioner.  In 1896, he moved to Tallahassee to become the Farm Director at what is now Florida A&M University.