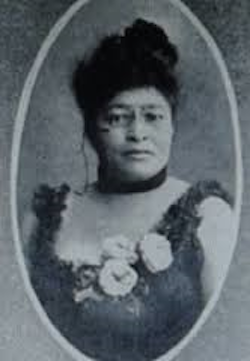 Early 20th Century East San Francisco (California) Bay civic leader and activist, Fannie Franklin Wall, was born in Gallatin, Tennessee, in 1860  She married Archy H. Wall, a staff sergeant in the U.S. Army who also later worked for the San Francisco Post Office.  They had two daughters, Lillian and Florence, and one son Clifton.  During the Spanish-American War, Archy Wall was transferred from Silver City, New Mexico to the Presidio in San Francisco and the family moved with him, ultimately settling in Oakland on Sixtieth Street.

Wall was an early community activist in the East Bay who participated in several organizations that promoted African American economic empowerment and antiracism efforts. She served multiple terms as president of the California Federation of Colored Women’s Clubs and was active in the National Association of Colored Women (NACW).  In 1926 she helped organize the Fifteenth Biennial Session of the National Association of Colored Women which met from July 30 to August 6, at Oakland’s Civic Auditorium.  Wall and NACW founder Mary McLeod Bethune were close friends and colleagues.

Wall co-founded the Art and Industrial Club of Oakland in 1906.  Under her presidency the Club joined the Child Welfare League and helped the Northern Federation Home and Day Nursery. The project was announced in 1914, and the home opened in 1918.  It was later named the Fannie Wall Children’s Home and Day Nursery.  Open to children of all races, ethnicities, and religions, it was the first facility in Northern California to provide various services including housing, boarding service, and day care for black orphans.

For many decades the Wall Children’s Home was the only home and day care in the Bay Area accessible to African American children, serving children referred to its services from multiple counties.  Its paid and volunteer staff included an array of educators, medical professionals, and social workers.

The Fannie Wall Children’s Home bordered the St. Vincent’s Day Home, which was only open to white children during the early twentieth century.  A board fence divided their grounds.  For many years the Wall Children’s home’s board of directors, which included Fannie Wall, faced great difficulties to keep the home operating.  Purchased by the Oakland Redevelopment Authority in 1962, 18 years after Wall’s death, the home on Linden Street was closed.

Wall also helped establish the “Colored” YWCA in Oakland.  That YWCA, officially called the Linden Street YWCA, was located across the street from the Wall Children’s Home and was created in response to the racially exclusive downtown Oakland YWCA.

Wall held offices in the Oakland National Association for the Advancement of Colored People (NAACP) and Urban League and founded and led the Spanish-American War Auxiliary.  She was also active in Oakland’s First African Methodist Church.

Fannie Franklin Wall died on April 14, 1944.  She was buried in the same grave as her husband in the San Francisco National Cemetery.