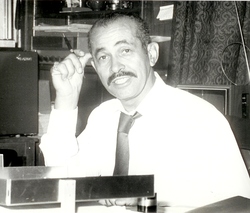 Wyatt Tee Walker, civil rights leader, pastor, and theologian, was born on August 16, 1928, in Brockton, Massachusetts to John Wise and Maude Pinn Walker. Wyatt attended elementary and high school in Merchantville, New Jersey. He earned a B.S. in chemistry and physics from Virginia Union University in Richmond in 1950. That same year he married Theresa Ann Walker. The couple had four children. In 1953, Walker received his Master of Divinity from Virginia Union’s Graduate School of Religion.

Later in 1953 Walker became pastor of Gillfield Baptist Church in Petersburg, Virginia. He also served as president of the National Association for the Advancement of Colored People (NAACP) in that city and as director of the state’s Congress of Racial Equality (CORE). Walker founded the Petersburg Improvement Association (PIA) which was patterned after the Montgomery Improvement Association (MIA). In 1958, Walker became a member of the Southern Christian Leadership Conference (SCLC), an organization headed by Dr. Martin Luther King, Jr. He rose quickly in the organization; in 1960 King appointed Walker the executive director of SCLC and King’s chief of staff, a post he held until 1964.

Walker’s civil rights participation reached beyond his administrative duties. On May 25, 1961, Walker was arrested in Birmingham, Alabama for participating in a Freedom Ride. Two years later, he helped organize the 1963 March on Washington.

On September 1, 1967, Walker relocated to New York City to become pastor of Canaan Baptist Church of Christ in Harlem. Under his dynamic leadership, Canaan’s congregation grew from 800 to 3,000. During this period he also served as Urban Affairs Specialist to New York Governor Nelson A. Rockefeller. In 1975, Walker earned a doctorate of ministry degree from Colgate-Rochester Divinity School. Four years later, he released his first of several books: Somebody’s Calling My Name: Black Sacred Music and Social Change.

During the 1980s, Walker continued his activism, becoming a part of the anti-apartheid movement. He became a member of the American Committee on Africa (now known as Africa Action), where he co-founded the Religious Action Network. He also served as chair of the Central Harlem Local Development Corporation, which built low income housing.

In 1993, Walker received national recognition when Ebony magazine named him one of America’s “15 Greatest Black Preachers.” In 2004, Walker retired as pastor of Canaan. He earned more acclaim in 2008 when he was inducted into the Civil Rights “Walk of Fame” in Atlanta, Georgia. On January 18, 2009, during the inauguration events in Washington, D.C. for President Barack Obama, Walker received the “Keepers of the Flame” award at the African-American Church Inaugural Ball.

In retirement, Walker, a member of Alpha Phi Alpha Fraternity, resided in Virginia and taught at the School of Theology at Virginia Union University. He died on January 23, 2018, at his home in Chester, Virginia. He was 89 years old. He is survived by his wife, Teresa; his daughter, Patrice Walker Powell; and three sons, Earl, Robert, and Wyatt Jr.