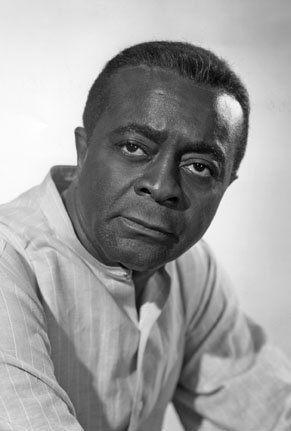 Best remembered for the role of Reverend Sykes in the film classic To Kill a Mockingbird (1962), William Walker was born in Pendleton, Indiana in 1917. The son of a freed slave, Walker was the first African American graduate of Pendleton High School. After graduating, Walker pursued an acting career and made his first film appearance as a bit player in The Killers. He went on to appear in more than 100 films and television shows although the industry limited him mainly to roles as a domestic servant.

As the racial climate in Hollywood began to improve in the 1940s, Walker graduated to portraying a wider variety of characters, including doctors and diplomats.  Eventually he moved on to directing and producing films. Determined to ensure other African American actors obtained roles that portrayed the race in a true light, Walker in the late 1940s became a civil rights activist.

In 1952, Walker was elected as a member the Screen Actors Guild Board of Directors, where he served until 1971. At the Guild’s annual meeting in 1952, Walker presented a report from the Negro Employment Committee on problems encountered by African American actors in Hollywood.  Walker and actor Ronald Reagan (who was then the SAG president) gave the presentation before the Screen Producers Guild meeting at the 20th Century Fox Studio.  The report titled “More and Better Roles for Negroes in Motion Pictures,” caused quite a stir among actors and other segments of the Hollywood film industry.  Although no significant improvements in casting occurred after the report, Walker, undaunted, continued to lobby Hollywood studio executives.  Eventually he partnered with the NAACP which in 1963, negotiated for the SAG’s Theatrical Agreement to include a non-discrimination clause.

Nine years later, in 1972, SAG formed the Ethnic Minorities Committee designed to increase acting opportunities for actors of color.  When the committee was formed, actor John Gavin (who was then president of SAG) appointed Robert DoQui (who emerged as an actor during the mid-1960s) as chairman of the committee.   William Walker was one of the first members of the executive board of the Ethnic Minorities Committee.  Those actors of color needing aid and attention in their efforts to obtain better employment in Hollywood were expected to report and take action through this committee. Sadly, Walker resigned his position on the Board a few months before the committee began its work, but remained active in the film industry until the 1980s.