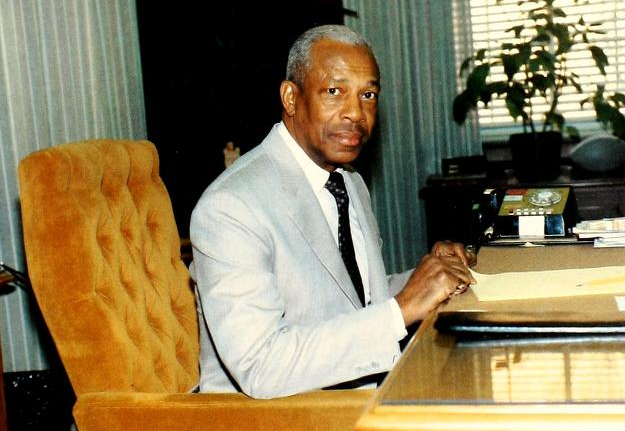 The grandson of slaves and the youngest of 13 children, sports and education figure LeRoy T. Walker is best remembered as the first African American President of the United States Olympic Committee, serving from 1992 to 1996.  LeRoy T. Walker was born to Willie and Mary Walker on June 14, 1918, in Atlanta, Georgia. After his father’s death, Walker moved in with older brother Joe, in Harlem, New York. Walker lived in New York until 1936 when he enrolled in Benedict College in Columbia, South Carolina. He was the first in his family to attend college.

At Benedict, Walker was an honor student and star athlete. He played basketball and football but earned national attention as a sprinter despite the fact that the school lacked a varsity track team. After graduating in 1940, Walker returned to New York and earned a master’s degree from Columbia University.

In 1945, Walker was named the football and basketball coach at North Carolina College (now North Carolina Central University), where he developed the college’s first track team. While continuing to coach, he received a Ph.D. in exercise physiology and biomechanics from New York University in 1957. After 1957 he began to gain recognition for his coaching talents, working closely with athletes like Olympian hurler Lee Calhoun.

Between 1960 and 1972, Walker served as a coach and consultant for a number of foreign Olympic teams. He then embarked upon a three-year stint as chairman of the Amateur Athletic Union (AAU).  At the 1976 Summer Olympics in Montreal, Canada, Walker made history as the first black coach of an American Olympic team. His team, which featured hurdler Edwin Moses and decathlete Bruce Jenner, won gold medals in six events. Walker’s leadership skills led to him being named chancellor (president) at North Carolina Central University in 1983. He also served a term as president of the National Association of Intercollegiate Athletics (NAIA), and the Athletics Congress (1984-1988).

In 1992 Walker was named President of the United States Olympic Committee.  As president he oversaw the four year preparation of thousands of American athletes for competition in the 1996 Summer Olympic Games in Atlanta, Georgia.  Walker was also responsible for fundraising to support the pre-game competition and the participation of American athletes in the Games.  At the Summer Olympics in Atlanta he led the 645-member U.S. delegation into the Centennial Olympic Stadium as part of the opening festivities.  While carrying out his duties as United States Olympic Committee (USOC) president and CEO, Walker relinquished his six figure salary from NCCU to take the unpaid presidency position.

Walker, a member of Omega Psi Phi Fraternity, received numerous honors and awards in his long career. He was inducted into the U.S. Olympic Hall of Fame in 1987.  In 1993 he became the first African American to receive the James J. Corbett Memorial Award, the top honor granted by the National Association of Collegiate Directors of America. Walker occupied an office on the NCCU campus in Durham where he was chancellor emeritus. In 1996 Walker was named the first President Emeritus of the USOC.