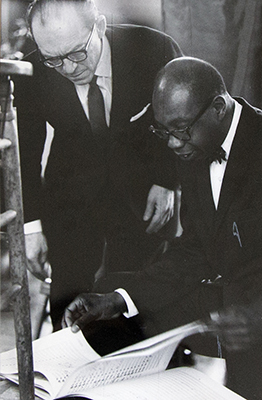 Winning the Pulitzer Prize for Music is one of the multitude of richly deserved tributes to composer, pianist, and educator George Theophilus Walker. His prolific career continued into his 90s with his commissioned Sinfonia No. 4 (Strands), premiered in 2012 by the New Jersey Symphony Orchestra.

George Theophilus Walker was born June 27, 1922, in Washington, D.C. to George T. and Rosa Walker. His father emigrated from Jamaica and became a prominent physician. His mother began his obligatory piano lessons at five years old. He grew to love music and entered Oberlin School of Music at 14, receiving a B.M. degree with class honors in 1941.

Walker entered the Curtis Institute of Music, and in 1945 became its first Black student to graduate. He studied under Serkin, Horszowski, Piatigorsky, and Primrose. That year his New York debut recital in Town Hall was followed by another debut where he played the 3rd Piano Concerto of Rachmaninoff with the Philadelphia Orchestra. Walker then attended Eastman School of Music where he received a Doctor of Musical Arts Degree in 1956. In 1957, he traveled to study in France including privately with Nadia Boulanger.

His academic appointments include professorships at Smith College in Massachusetts, the University of Colorado, and the University of Delaware where he held the first Minority Chair at that institution. He was appointed Chair of the Music Department, Rutgers University-Newark in 1975. He became a Distinguished Professor there in 1976 and retired from its faculty in 1992.

Over his career, Walker published over 90 works including sonatas for piano, a mass cantata, songs, organ pieces, choral works, sonatas for cello, violin and viola, and works for brass and woodwinds. Paul Kapp, at General Music Publishing, was the first to publish the bulk of his work in 1971. Publication with General Music Publishing, a leading classical music publishing house, was crucial to his finally gaining critical recognition. In the 1970s, African American conductor Paul Freeman began to issue recordings of Walker’s orchestral music. Natalie Hinderas, a leading African American pianist, also championed his piano works on her national tours. Commissions began to arrive from symphony orchestras and many others, followed by performances and recordings. Walker’s Lyric for Strings, written in 1941 as a memorial to his grandmother, is the most frequently performed music by a living American composer.

In 1996, George T. Walker became the first Black composer to win the Pulitzer Prize for Music, for his Lilacs, which was premiered earlier that year by soprano Faye Robinson and the Boston Symphony Orchestra.

Among his many honors are Fulbright, Guggenheim, and NEA awards; seven honorary doctoral degrees, and the most recent honor, the Aaron Copland Award from ASCAP, 2012. He was a member of the American Classical Music Hall of Fame. Walker delivered the commencement address at the Eastman School of Music in 2012 where he received a Doctor of Music degree.

At 87, he wrote a violin concerto for his son Gregory, violinist and composer, who premiered it in 2009. His son, Ian Walker, is a playwright, actor, and director in San Francisco.

George Theophilus Walker passed away in Montclair, New Jersey on August 23, 2018. Walker was 96 years old at the time of his passing.