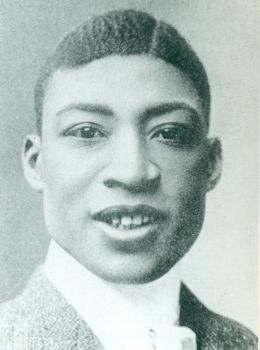 George Nash Walker was born in 1873 in Lawrence, Kansas. He left at a young age to follow his dream of becoming a stage performer and toured with a traveling group of minstrels. After performing at shows and fairs across the country, Walker met Bert Williams in 1893 and they formed the duo known as Williams and Walker. During this time, white men performing in minstrel shows blackened their faces to pose as black performers. As a counter, Williams and Walker billed themselves as “Two Real Coons,” a descriptor that marked the two as black men and a reference to the derogatory term “coon” used to describe people of African descent in the United States.  While performing as a vaudeville act throughout the United States, George Walker and his partner Bert Williams popularized the cakewalk, an African American dance form named for the prize that would be earned by the winners of a dance contest.

There was a distinct difference in presentation styles between the two performers. While the light skinned Bert Williams donned blackface makeup, George Walker was known as a “dandy” who performed without makeup. While Williams played the role of the comic figure, George Walker played the straight man, a dignified counterpoint to the prevailing negative stereotypes of the time.  Offstage, Walker was an astute businessman who managed the affairs of the Williams and Walker Company, a venture that brought them fame and wealth nationally and internationally. In 1903, they performed In Dahomey at Buckingham Palace in London and then toured the British Isles.

Working in collaboration with Will Marion Cook as playwright, Jesse Shipp as director, and Paul Laurence Dunbar as lyricist, Williams and Walker produced a musical called In Dahomey in 1902. In this play, with its original music, props, and elaborate scenery, Walker played a hustler disguised as a prince from Dahomey who was dispatched by a group of dishonest investors to convince blacks to join a colony. A landmark production, In Dahomey was the first all black show to open on Broadway. Another musical, In Abyssinia opened in 1906 in New York at the Majestic Theater. Both of these productions used African themes and imagery, making them unique for the time. Other Williams and Walker productions include:  The Sons of Ham (1900), The Policy Players (1899), and Bandana Land (1908).