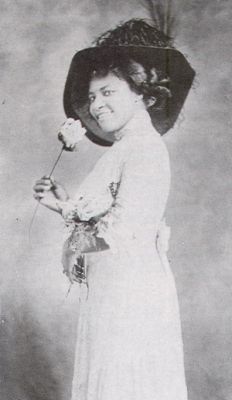 Lelia Walker was born in Vicksburg, Mississippi, in 1885.  She grew up in St. Louis, Missouri and attended Knoxville College in Tennessee before entering the family business.  Although Lelia was a competent business manager who often clashed with Madam C.J. Walker over the company’s administration, she lost interest in company affairs after the death of her mother and instead immersed herself in Harlem’s dynamic social life in the 1920s.  She changed her name to A’Lelia to reflect her new interests.

As part of her inheritance, A’Lelia Walker assumed control over the lavish estate, Villa Lewaro, on the Hudson River, north of New York City that had been built by Madam Walker as well as the Harlem townhouse on 136th Street near Lenox Avenue.  Taking advantage of the success of the Walker Company in the early 1920s, A’Lelia entertained the rich, famous, and soon to be famous including African and European royalty, Harlem Renaissance artists, civil rights leaders, white and black bankers and businessmen.  A Fourth of July extravaganza included fireworks for visiting Liberian President C.D.B. King.  Her staff sent out 9,000 wedding invitations to friends and Walker Company agents in every state in the U.S. as well as Nigeria, Liberia, England, France, Haiti and Panama upon the marriage of her daughter, Mae, in November 1923.  At almost six feet tall, A’Lelia Walker’s attire and signature turban became as legendary as her parties; she spared no expense on either.

In 1927 Walker converted a floor of the Harlem townhouse she owned into a salon and called it the “Dark Tower.”  The salon was intended as a place to entertain and support young Harlem writers and artists. Walker underwrote the expenses of two Harlem Renaissance artists, the writer Eric Walrond and the singer and writer Taylor Gordon. She also opened Dark Tower to Renaissance figures such as Langston Hughes, Zora Neale Hurston, Bruce Nugent and Aaron Douglas who gathered for art exhibits and poetry readings.  The “Dark Tower” closed in October, 1928.  She wrote afterwards, “Having no talent or gift, but a love and keen appreciation for art, The Dark Tower was my contribution.”

By 1930, Walker Manufacturing Company revenues fell sharply with the coming Great Depression.  A’Lelia was forced to sell much of the valuable art and antiques that had made Villa Lewaro famous in Africa, Europe, and North America.  In 1932, the estate itself went on the auction block.  On August 16, 1931 A’Lelia Walker died of a cerebral hemorrhage while attending a friend’s birthday party in Long Branch, New Jersey.  She was forty-six years old.

A’Lelia Walker’s funeral was lavish and memorable.  More than 11,000 people filed past her casket in a Harlem mortuary and 1,000 turned out for the invitation-only funeral where Mary McLeod Bethune delivered the eulogy and Rev. Adam Clayton Powell presided over the service.  Langston Hughes read a poem written for the occasion: “So all who love laughter/And joy and light/Let your prayers be as roses/For this queen of the night.”