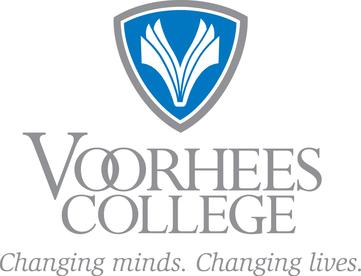 Voorhees was first opened in 1897 as Denmark Industrial School. In 1902, the school changed its name to Voorhees Industrial School in honor of Ralph Voorhees, a philanthropist from Clinton, New Jersey who donated $5,000 to purchase the acreage for the institution and build its first building. Voorhees offered its first post-secondary instruction in 1929, the same year it changed its name to Voorhees Normal and Industrial School. Voorhees made another name change in 1947, becoming the Voorhees School and Junior College. The college made its final name change to its current name, Voorhees College, in 1962, and awarded its first baccalaureate degree in 1969.

Founded by Elizabeth Evelyn Wright, Voorhees is associated with the Episcopal Church. In 1924 the American Church Institute for Negroes, which is an affiliate of the Episcopal Church, began to support the school, beginning a relationship that lasts to this day.  Wright, a graduate of Tuskegee Institute, modeled Voorhees after her alma mater which focused on vocational education. By the 1930s, however, Voorhees offered a mixture of vocational and liberal arts education. Voorhees College is designated as an Historic District in South Carolina, and has a rural campus consisting of 356 acres.

The school is the first historically black college or university (HBCU) in South Carolina to become accredited by the Southern Association of Colleges and Schools. Voorhees offers degrees in accounting, biology, business administration, criminal justice, computer science, sociology, English, health and recreation, mathematics, mass communication, and organizational management. It also offers training courses in cyber security education based on a partnership with the National Nuclear Security Administration (NNSA) and which involves summer internships for students at the NNSA.

Voorhees College has a small enrollment. The Fall 2009 enrollment number stood at 701 students. The school employs 35 full-time faculty members and has a student to faculty ration of 15 students per faculty member. Voorhees College’s current president, Dr. Cleveland L. Sellers, Jr., is a graduate of the institution and was a well-known civil rights activist with the Student Non-Violent Coordinating Committee (SNCC) in South Carolina in the 1960s.