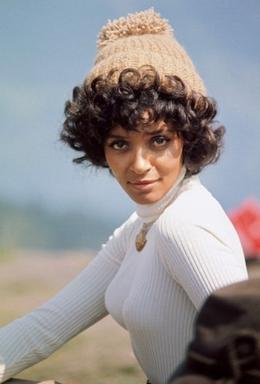 Vonetta McGee was a talented actress now best remembered as a popular leading lady in blaxploitation films such as Hammer (1972), Blacula (1972), and Shaft in Africa (1973).” Born Lawrence Vonetta McGee on January 14, 1945 to parents Lawrence and Alma (Scott) McGee, she grew up in San Francisco. Following graduation from Polytechnic High School, she attended San Francisco State University, where she caught the acting bug through her involvement with Aldridge Players West, a socially-aware black theater troupe.

The same year, McGee played the title role in Faustina, a light Italian comedy. Returning to the U.S. she landed a supporting role in Universal’s The Lost Man (1969), a re-make of British director Carol Reed’s classic 1947 thriller about a man eluding the police, Odd Man Out. The story was adapted and updated for Sidney Poitier, who played a black revolutionary on the run.

Next came the spy thriller, The Kremlin Letter (1970). It was a small role (her character is simply called ‘The Negress”), but it was an important picture: Based on a best-selling novel, it was directed by Hollywood legend John Huston and featured a huge cast of A-list actors, including Orson Welles and Max von Sydow.

McGee entered the blaxploitation era with Melinda (1972, taking on the title role of the girlfriend of a popular radio DJ (played by Calvin Lockhart) who is drawn into a violent revenge scheme when she is murdered. In Hammer, her leading man was Fred “The Hammer” Williamson. With Max Julien, her live-in partner for three years in the mid-1970s, she shared the title roles in Thomasine and Bushrod (1974). Like many of the black actors and directors of the time, she did not approve of the “blaxploitation” label, considering it a racist term. Yet like many of the black actors of the time, few roles were offered to them outside the blaxploitation genre.

By 1975 the blaxploitation era was over. That year she appeared with Clint Eastwood in The Eiger Sanction. For this Alpine espionage thriller, Eastwood was McGee’s co-star and her director. In 1984, she contributed a spirited performance to the cult classic Repo Man.

Vonetta McGee was beset by health problems in her later years. On July 9, 2010, she died of cardiac arrest at the age of 65.