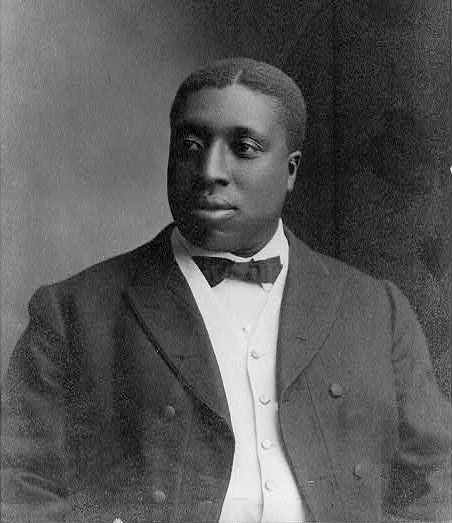 William Tecumseh Vernon was an African Methodist Episcopal bishop, educator, and university administrator who was born in Lebanon, Missouri on July 11, 1871.  His parents were Rev. Adam Vernon, a former slave, and Margaret (née Hooker) Vernon.  He attended Lincoln University in Jefferson City, Missouri between 1886 and 1890 and graduated as class orator and valedictorian.  After teaching at public schools in Boone Terre and Lebanon, Missouri, he attended Wilberforce University in Wilberforce, Ohio, where he earned a degree in theology.

In 1896, Vernon joined the Missouri Conference of the African Methodist Episcopal (A.M.E.) Church.  In 1896, at the age of 25, he became president of Western University in Quindaro, Kansas, an A.M.E-sponsored university, and served there until 1906.  He led the expansion of the school from one to four buildings and from approximately 25 to 400 students.  He also arranged for partial state funding for the university.  While president of Western he published a collection of writings: The Upbuilding of a Race, or The Rise of a Great People: a Compilation of Sermons, Addresses and Writings on Education, the Race Question and Public Affairs (1904).

A staunch Republican, Vernon rallied black Americans to the party and supported the election of Republican Governor William E. Stanley in 1898.  In 1906, President Theodore Roosevelt appointed him as Registrar of the United States Treasury, a position to which President Taft reappointed him in 1910.  It was the highest government position held by an African American up to that time.  He served as Registrar of the U.S. Treasury from June 11, 1906 to March 14, 1911.  While he served that position in Washington, D.C., he continued to be active in the A.M.E. Church.  Throughout his whole career, he traveled the nation giving lectures, addresses, and sermons, as well as meeting with other black educators.

From 1911 to 1912, Vernon served as a Supervisor of Government Schools, and from 1912 to 1915 he served as president of Campbell College in Jackson, Mississippi.  From 1915 to 1920, he was pastor of Avery Chapel A.M.E. Church in Memphis, Tennessee.  While there, he published What the American Negro Expects of World-Wide Democracy, a Statement of the Negro’s Case and Cause (1919).

In 1920, at the general conference of the A.M.E. Church in St. Louis, Missouri, Vernon was elected bishop. He made two trips to Africa between 1920 and 1924 with his wife, serving the church for four years in South Africa as Bishop of the 17th Episcopal District, which covered the Cape Colony, Transvaal, Orange Free State, Natal, and Basutoland.  He established the Emily E. Vernon Mission School in Basutoland, now Lesotho.  Vernon retired as bishop in 1933 and returned to Western University to serve as superintendent of the State Industrial Department until 1938.

On August 18, 1901, Vernon married Emily Jane Embrey of Philadelphia, Pennsylvania, a graduate of Wilberforce University and daughter of an A.M.E. bishop.  They had no children.  William Tecumseh Vernon died in Kansas City on July 25, 1944. He was 73.