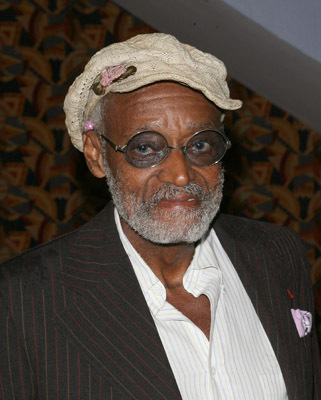 Actor and director Melvin Van Peebles was born on August 21, 1932 in Chicago, Illinois to parents Edwin Griffin and Marion Peebles. He grew up in suburban Phoenix, Illinois, where his father worked as a tailor and graduated from Thornton Township High School in 1949. Van Peebles spent a year at West Virginia State college before transferring to Ohio Wesleyan University, where he graduated in 1954 with a degree in English literature.

Van Peebles joined the Air Force 13 days after graduation, serving for three and a half years. In 1956 he married the German actress and photographer, Maria Marx. They lived in Mexico for a brief period, where he painted portraits, before coming back to the United States in 1958, where he worked as a cable car gripman in San Francisco, California.

In the early 1960s Van Peebles published four novels and one-story collection in French and made another short film, Cinq cent balles (1965). He made his first feature-length film, The Story of a Three-Day Pass (La Permission) in 1968 which caught the attention of Hollywood producers who mistook him for a French auteur. Van Peebles’s first Hollywood film was the 1970 Columbia Pictures comedy Watermelon Man starring Godfrey Cambridge. The movie tells the story of a casually racist white man who suddenly wakes up black and finds himself alienated from his friends, family, and job. In 1970 Van Peebles was also scheduled to direct filming of the Power Ridge Rock Festival, which was banned by court injunction because of the open use and selling of drugs.

After Watermelon Man, Van Peebles became determined to have complete control over his next production, which became the groundbreaking Sweet Sweetback’s Baadasssss Song which was released in 1971. Privately funded with his own money, and in part by a $50,000 loan from Bill Cosby, Sweet Sweetback—which was made with a primarily nonprofessional cast and crew—was a huge success with African American audiences and pioneered the “blaxsploitation” film genre. Van Peebles directed, scripted, and edited the film, wrote the score, and directed the marketing campaign. The film, which in the end grossed $10 million, was, among many others, acclaimed by the Black Panthers for its political resonance with the black struggle.

Van Peebles never made another film and by the 1980s had become an options trader on the American Stock Exchange.  He continued to work with others, however, in theater and film. He was nominated for three Tony Awards: in 1972, for Best Book, which is a screenplay for a musical, and Best Score, as both composer and lyricist, for  the play Ain’t Supposed to Die a Natural Death, and in 1973, as Best Book (Musical) for Don’t Play Us Cheap.

Melvin Van Peebles passed away on September 22, 2021, at his home in Manhattan, New York. He was 89 years old. Van Peebles is survived by sons, Mario and Max, and daughter Marguerite.