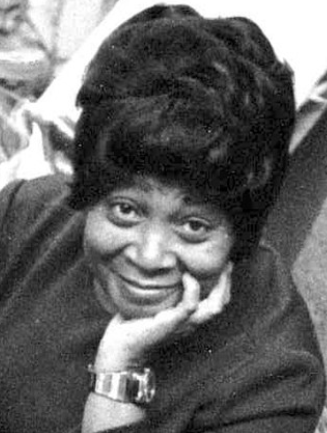 Zelda Valdes was born on June 28, 1905, in Chambersburg, Pennsylvania. She studied her grandmother’s work as a seamstress and also worked in her uncle’s tailoring shop. Valdes began working as a stock girl at a high-end boutique around 1920 and worked her way up to become the boutique’s first black sales clerk and tailor.

In 1948 at the age of forty-seven, Valdes opened the first African American owned boutique in Manhattan with her sister, Mary Barbour, as her assistant. Located at Broadway and West 158th Street, she called her store, Chez Zelda. Valdes’s boutique soon attracted celebrities and society women. She later moved Chez Zelda to midtown Manhattan, setting up shop on 57th Street. In 1949, Valdes was elected president of the New York Chapter of the National Association of Fashion and Accessory Designers (NAFAD), an organization of black designers that was founded by educator and political activist Mary McLeod Bethune.

Valdes’s fashion designs were responsible for creating a new sexier image for singer Joyce Bryant,  a huge star in the African American community in the early 1950s who Life magazine later described as the “the Black Marilyn Monroe.” In 1958, Playboy magazine founder Hugh Hefner hired Valdes to design the first Playboy Bunny costumes. Hefner commissioned Valdes to do this work on the recommendation of the magazine’s promotion director, Victor Lownes. Originally, the Valdes design had the ears taller and the ensemble lacked the trademark bow tie, collar, and cuffs. First unveiled publicly in an early episode of Playboy’s Penthouse Magazine, the bunny costume made its formal debut at the opening of the first Playboy Club in Chicago, Illinois on the evening of February 29, 1960.