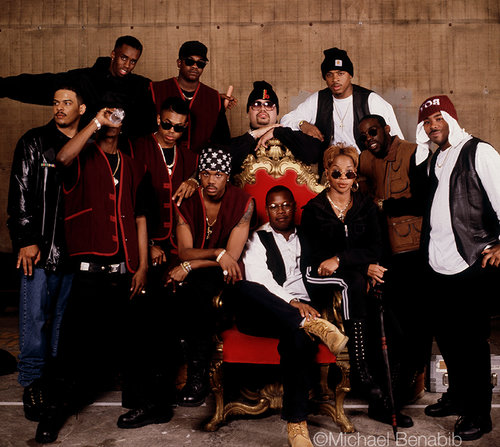 Uptown Records, one of the earliest hip-hop labels, was founded in 1986. It signed artists such as Mary J. Blige, Jodeci, Heavy D and the Boyz, and Father M.C. Uptown Records was founded by Andre Harrell, a former member of the group Dr. Jackell and Mr. Hyde. It quickly set up a distribution deal with MCA records. The name of the label, Uptown, was the term New Yorkers used to describe the boroughs Manhattan and The Bronx, as well as the northern suburbs, Yonkers, New Rochelle, and Mt. Vernon.

Harrell quickly signed the group Heavy D and the Boyz and Marley Marl along with other acts and then created a compilation album called Uptown Is Kickin’ It, which was released in 1987. That same year, Heavy D and Boyz released their debut studio album Living Large which went gold which sold over 300,000 copies. Al B. Sure released his debut studio album on Uptown Records in 1988 called In Effect Mode, which was the first label album to go platinum, selling 3,000,000 copies. In 1989 Teddy Riley who was credited with creating the New Jack Swing, formed a group called Guy alongside Aaron Hall and Damion Hall. They signed with Uptown Records and released their self-titled debut album Guy in 1989. Uptown Records continued its success with Heavy and the Boyz’ second album, Big Time (1989).

In 1990 future rap mogul Sean “Diddy” Combs became an intern at Uptown Records. During his time with the label he worked with Jodeci, Father M.C., and Mary J. Blige. These artists all released successful albums. Father M.C.’s albums included Father’s Day (1990), Close to You (1992), and Sex is Law (1993). Jodeci released Forever My Lady (1991), Diary of a Mad Band (1993), and The Show, the After Party, and the Hotel (1995). Mary J. Blige released two successful albums with Uptown Records, What’s the 411? (1992) and My Life (1994), which were both successful albums. Uptown Records also was involved in film and television when it supplied the soundtrack for the Fox television show New York Undercover.

Despite the record label’s initial success, its decline began when Combs was fired from Uptown Records after his conflict with Harrell. Combs left the label and took with him up-and-coming rapper The Notorious B.I.G. to help establish his label, Bad Boy Records. Tension at Uptown Records also led Mary J. Blige and Jodeci to sign with Suge Knight’s Death Row. In 1995, Harrell moved to Motown records. Heavy D replaced Harrell as CEO but that did not stop the decline. In 1999 Uptown Records closed its operations. Nonetheless Uptown Records left a powerful legacy in the music industry as the first major hip-hop label.