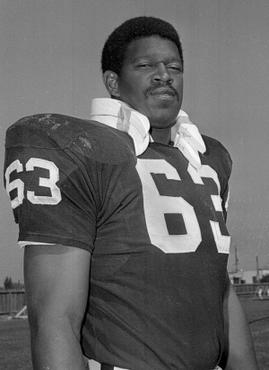 Gene Upshaw was a Hall of Fame professional football player for the Oakland Raiders and Executive Director of the National Football League (NFL) Players’ Association.

Upshaw was born in Robstown, Texas in 1945 where he picked cotton as a child and played high school football. He later played football at mostly Latino Texas College of Arts and Industries (now Texas A&M University, Kingsville), before being drafted as a guard for the Oakland Raiders in 1967.

Upshaw’s professional football career as a guard with the Oakland Raiders lasted from 1967 until 1981.  He was considered one of the best offensive linemen in the history of the sport.  During his illustrative career he was voted top lineman in 1977 and runner-up for that honor in 1980. Upshaw was the only player in NFL history to play in three Super Bowls in three different decades for the same team.  In 1987 Upshaw became the first guard to be voted into the Professional Football Hall of Fame.

In 1983 Upshaw became the first African American to serve as executive director of the NFL player’s union.  Assuming the leadership at a time when the union was in dire financial straits, he rebuilt the organization, led the players through a strike in 1987 and afterwards helped build the NFL into the most prosperous professional sports league in the country.

By 1993 Upshaw had negotiated a deal that gave players the right to free agency in exchange for a salary cap. This arrangement, which he considered his greatest achievement as the player’s representative, granted football NFL players the same freedom of movement as players in baseball, basketball, and other major sports. Upshaw oversaw enormous changes in the NFL including not only free agency but an explosion in player salaries and the debate over provisions for retired players.

Eugene Thurman Upshaw, a member of Alpha Phi Alpha Fraternity, died suddenly on August 21, 2008 at his home near South Lake Tahoe, California, with his wife Terri and three sons by his side.