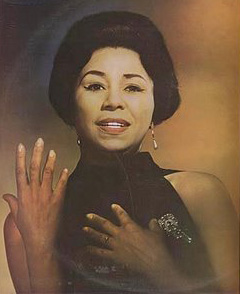 Hear a soundtrack specially chosen to enhance your learning about Margaret Tynes (1919-?)

Margaret Tynes is an African American opera, concert, and oratorio soprano and singing actress. Tynes was born on September 11, 1919 to parents Rev. and Mrs. J. W. Tynes, in Saluda, Virginia. She earned a Bachelor’s Degree from North Carolina Agricultural and Technical State University in 1939.  While there she joined Alpha Kappa Alpha Sorority Incorporated. Tynes continued her studies at the Juilliard School in New York City, New York and later earned a Masters in Music Education from Columbia University in 1944. While at Columbia, she starred as Harry Belafonte’s leading lady in an off-Broadway show he produced called Sing Man, Sing!

Tynes has performed with the leading opera companies in the United States, Canada, and throughout Europe including the (New York) Metropolitan Opera and the Vienna (Austria) Staatsoper. Her roles have included Lady Macbeth (Macbeth), Carmen (Carmen), Aida (Aida), and Dido (Dido and Aeneas). She gained international acclaim for her role as Salome at the Festival of Two Worlds in Spoleto, Italy.

In 1957, Tynes was invited to the NAACP Freedom Fund Dinner where she was joined by Rose Morgan, Steve Allen, Jackie Robinson, and Cab Calloway. The event honored Duke Ellington and Branch Rickey, the baseball executive who brought Jackie Robinson to the Major League. Tynes also made guest appearance on shows and showcased her different skills as both an opera singer and actress. In 1958 and 1959 she made an appearance on the Ed Sullivan Show, both times presenting herself as a gospel singer. Also in 1959, she made a guest appearance on the Tonight Show then hosted by Jack Paar.

Margaret Tynes made her jazz recording debut in 1956 when she recorded a jazz suite called A Drum is a Woman with Duke Ellington. For that suite, which was recorded on the Columbia label, she was featured on songs “A Drum is a Woman,” “A Drum is a Woman Part 2, Finale” as well as a bonus track called “Pomegranate.” “A Drum is a Woman” tells the story of imaginary Madam Zajj, the personification of African rhythm, and Caribee Joe. Zajj travels throughout the world and finds African cultural influences as she tells a brief history of the rise of Jazz and Bebop.  A Drum is a Woman was produced for television on the US Steel Hour on May 2, 1957.  In 2004, the album was re-released on Columbia Records.

Margaret Tynes disappeared from public view by 1960.  There is no record of any performances or appearances after that date.