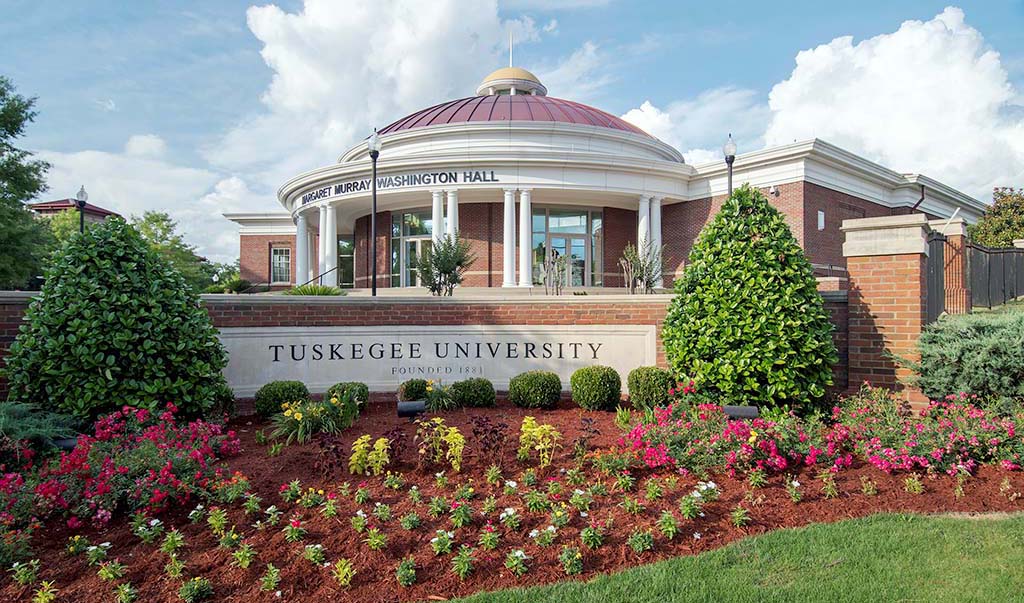 Tuskegee University, one of the largest historically black universities in the United States, is a private university located in Tuskegee, Alabama. It was founded by Lewis Adams, a former slave, and George W. Campbell, a former slave owner.

Despite having no formal education, Adams could read and write, was a tinsmith, harness-maker, and shoe-maker, and was recognized as a prominent leader in the African American community of Macon County, Alabama.  Because of this, W.F. Foster, a white candidate for the state senate, asked Adams what he would like in return for securing the black vote for Foster.  Adams asked that an educational institution for blacks be established.  After Foster won the election, $2,000 (per year) was allocated from the state general budget for such a school to be located in Macon County.  It was officially founded on July 4th, 1881, with Booker T. Washington, then a 25-year-old teacher at Hampton Institute in Virginia, as its first principal, a position he maintained until his death in 1915.

The school began as the Normal School for Colored Teachers at Tuskegee in a tiny space at the Butler Chapel AME Zion Church.  A year later, it was moved to the grounds of a vacant plantation that Washington had purchased.  A former slave, Washington was dedicated to the ideal of self-reliance based on industrial rather than purely liberal education, and he became internationally famous for advocating this to the recently emancipated slaves.  He modeled Tuskegee after his own experience at the Hampton Institute.  Because he required all Tuskegee students to do some form of labor, Tuskegee’s name soon changed to the Tuskegee Normal and Industrial Institute. The school’s original buildings were actually built by its early students.  Washington thought labor and knowledge of practical trades were just as valuable and dignified as a typical university education, an idea criticized by activists like W.E.B. Dubois as accommodating to white prejudice and supportive of racial discrimination.

Despite his dependence on white state and private financial support, Washington made sure that Tuskegee had an all-black faculty. It was the first major educational institution in the South to do so, and he made this requirement in a calculated move to “develop Black leadership to the maximum extent.”  By the time of Washington’s death, Tuskegee was recognized nationwide and had gained institutional independence.

Tuskegee acquired university status in 1985.  Today it offers undergraduate, masters, professional, and doctoral degrees to more than 3,000 students with a strong orientation toward the relationship between education and work force preparation in the sciences, professions and technical areas.  It was the first black college to be designated as a Registered National Historic Landmark (1966), and is the only black college to be designated as a National Historic Site.