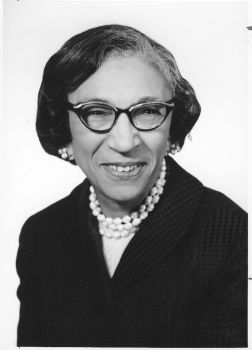 Turner was educated in a private black school in Macon sponsored by the American Missionary Association and then continued her education at Morris Brown College in Atlanta, studying business, which for women in the late 1910s meant primarily clerical work. After graduation from Morris Brown in 1918 Turner became a secretary at Tuskegee Institute in Alabama where she met leading professors such as George Washington Carver.

Her time at the Tuskegee Institute was short however as she worked briefly for the Superintendent of Negro Education for the State of Mississippi who made her his personal secretary. Turner moved to Mississippi but held her new position for six months.  She was hired by North Carolina Mutual Insurance (NCMI) in 1920, setting up branch offices in Oklahoma, Arkansas, and Mississippi. In 1924 Turner applied for and received a position at North Carolina Mutual headquarters in Durham, North Carolina.

The main offices of North Carolina Mutual were located on Parrish Street, known at the time as the “Black Wall Street” due to the presence of a number of African American owned and operated financial institutions. Turner soon became the personal secretary to Charles C. Spalding, one of the North Carolina Mutual Insurance founders.

Over 36 years Turner slowly rose through the ranks of NCMI through hard work and a natural aptitude for finance. She was placed in charge of the company investment portfolio of mortgages and government bonds.  She decided to shift company assets to stocks in what a male colleague at the time condescendingly called “her little project.”  Through careful research, cultivating important contacts in the financial community, and wise trades, that portfolio grew and added significantly to the twenty million dollars in assets the company enjoyed in the 1940s.  Turner’s rise at North Carolina Mutual was not without setbacks; she was discriminated against early in her career, receiving less pay for the same positions as male coworkers. She protested and was eventually awarded an equal salary.

In 1957 Turner was finally appointed Treasurer of North Carolina Mutual and three years later she became the first woman Vice President at the company.  She was also elected to the NCMI Board of Directors. Turner continued to serve on the board for five years until retirement in 1965. Developing an active retirement life, Viola Turner married the third time in her late 60s. Viola Mitchell Turner passed away in Durham in 1988.