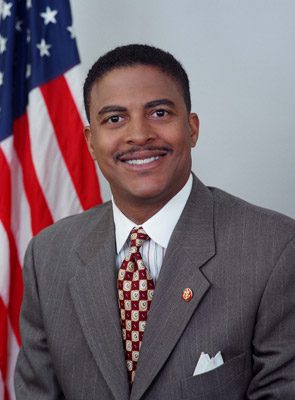 Walter Rayford Tucker III is best known for his brief period as a Southern California Congressman. Tucker was born in Compton, California on May 28, 1957 to a well established political family.  His father, Walter Tucker II, worked as a dentist and then entered politics in Compton in 1967 when he was elected to the Compton School Board. Walter Tucker II became Mayor of Compton in 1970.  Tucker’s mother, Martha, was a writer and real estate agent.

Young Walter Tucker graduated from Compton High School in 1974 and then attended Princeton University for two years before finishing his undergraduate education at the University of Southern California in Los Angeles in 1978. Tucker earned his J.D. at Georgetown University Law School in 1981. After working briefly in private practice in Compton, Tucker served as a deputy district attorney for Los Angeles County between 1984 and 1986.  During this time Tucker became an ordained minister at the Bread of Life Christian Center in Carson, California.  He also married Robin Marie and the couple had two children, Walter Rayford IV and Autumn.

When Walter Tucker II died of cancer during his third term as Compton’s mayor, younger Tucker ran for the mayor’s post and won the special election on April 16, 1991.  Tucker at 34 became the city’s youngest mayor. Walter Tucker III, however, presided over a different city than his father had known.  Once a bustling economic center of the Southern California oil industry which could claim President George H.W. Bush as a former resident, by the 1980s the town had experienced economic decline, growing poverty, and rising tensions between its black majority and a rapidly growing Latino population.  Sensing the changing racial dynamic of the city, Tucker decided to run for Congress in 1992 for the seat of retiring U.S. Representative Mervyn Dymally. Although Dymally endorsed his daughter, Lynn, Tucker defeated her in the Democratic Primary and then won 86% of the vote in the general election.

In March 1994, just 14 months into his term, federal prosecutors revealed that Tucker and a member of the Compton City Council were under investigation for bribery.  Tucker was indicted on August 22, 1994.  Despite his indictment, Tucker was reelected in November with 77% of the vote.   His trial proceeded, however, and on December 8, 1995, Tucker was convicted on seven counts of extortion and two counts of tax evasion for accepting $30,000 in bribes and then failing to report the money on his federal income taxes. He resigned his Congressional seat seven days later.  Shortly after his resignation, Tucker endorsed his wife Robin in the Democratic Primary for his former congressional seat.  Robin Tucker lost to California State Assemblywoman Juanita Millender-McDonald who went on to win the seat in the November general election.

Walter Tucker III organized a prison ministry soon after he began serving his 27-month sentence. Upon his release in September 1998, he became the Southern California director of the nation prison fellowship headed by Charles (Chuck) Colson, a former aide to President Richard Nixon and principal figure in the Watergate scandal.