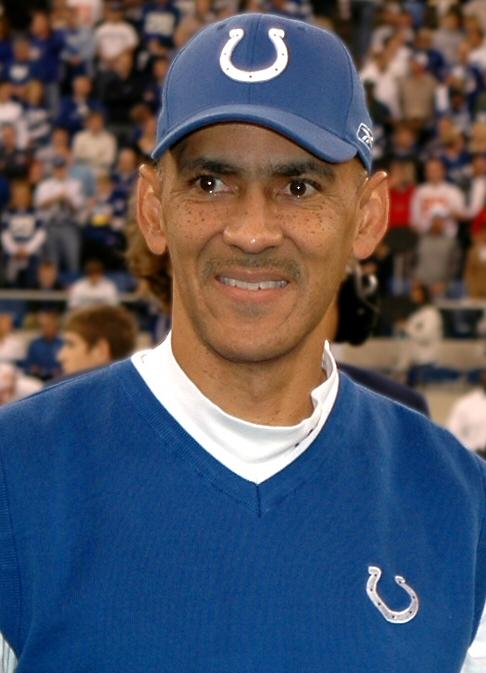 Tony Dungy, a former professional football player and coach for Tampa Bay Buccaneers (1996-2001) and the Indianapolis Colts (2002-2008), was the first African American coach to win the Super Bowl.  Dungy has been hailed as a coaching genius, changing losing organizations into winners.   Despite overwhelming personal and professional obstacles, he continues to be the picture of humility, simultaneously earning respect both on and off the field because of his strong convictions and high personal standards of ethics and behavior.

Tony Dungy was born on October 6, 1955, in Jackson, Michigan to Wilbur and CleoMae Dungy, both of whom were educators.  Early on, his family placed a great deal of emphasis on academics and intellectual achievements as much as athletic ones.  However, even in a household where the focus was on education, Dungy was drawn to sports, particularly football. He attended Jackson’s Parkside High School, where he played guard for the basketball team and quarterback for the football team. Dungy excelled as an athlete and was even featured in the Sports Illustrated section, “Faces in the Crowd,” in 1970.  His immense talent and numbers did not go unnoticed by colleges and recruiters around the nation.

In 1973, University of Minnesota head coach Cal Stoll recruited him. By the end of his freshman year at Minnesota, Dungy had cracked the starting lineup.  From 1973 to 1976 he was the star quarterback for the Golden Gophers.  He finished his college career ranked fourth in total offense among all players in the history of the Big Ten Conference.

In 1977, Dungy signed as a free agent with the Pittsburgh Steelers. He played as a reserve-special team’s player for the Steelers in 1977 and the Super Bowl championship 1978 seasons, leading the team in interceptions in the latter campaign. In 1979, he briefly played for the San Francisco 49ers before being traded a year later to the New York Giants, with whom he finished his career in 1980.  After his short stint in the National Football League (NFL), Dungy dedicated himself to coaching.

In 1980 Dungy was invited to become an assistant coach for his alma mater the University of Minnesota, where he remained for one season. In 1981, he returned to the NFL as an assistant coach for the Pittsburgh Steelers.  He quickly began to rise through the ranks, and in 1982, he was named defensive backfield coach.  In 1984, he became not only the lone black defensive coordinator in the NFL but also the youngest in its history. He left the Steelers in 1989 to become the defensive backs coach for the Kansas City Chiefs and in 1992 took over as defensive coordinator for the Minnesota Vikings. While at Minnesota, Dungy’s defense was ranked first in the NFL.

His dream of coaching an NFL team was made reality in 1996, when he was hired as head coach of the Tampa Bay Buccaneers.  Dungy systematically transformed his team from the bottom-of-the-heap to playoff contention: the Buccaneers made four playoff appearances and won their division in 1999.  As a coach, he had the most wins in Buccaneers’ history.  Despite his successes, he was unable to take the team to the Super Bowl and was fired in 2001.

In 2002, Dungy was hired as head coach of the Indianapolis Colts.  Early on he had mixed results as he methodically re-tooled the team’s defenses.  Despite the team making the playoffs every year, it was not until 2006 that they advanced to the Super Bowl. On February 4, 2007, Dungy and the Indianapolis Colts faced Lovie Smith and the Chicago Bears in Super Bowl XLI– never before had two black coaches faced each other in the Super Bowl.  The Colts won the game 29-17, and Dungy made history as the first black coach to win the Super Bowl. Dungy retired from coaching in 2008 and since 2009 has worked as an analyst on NBC pre-game show, Football Night in America.

Outside of football, Dungy’s charitable contributions have earned him much reverence and admiration. He has been active in many community service organizations such as the Boys and Girls Club and has founded a youth mentoring program.  In addition, he is very active in his church and various Christian organizations.  In 2007, George W. Bush appointed him to the President’s Council on Service and Civic Participation.