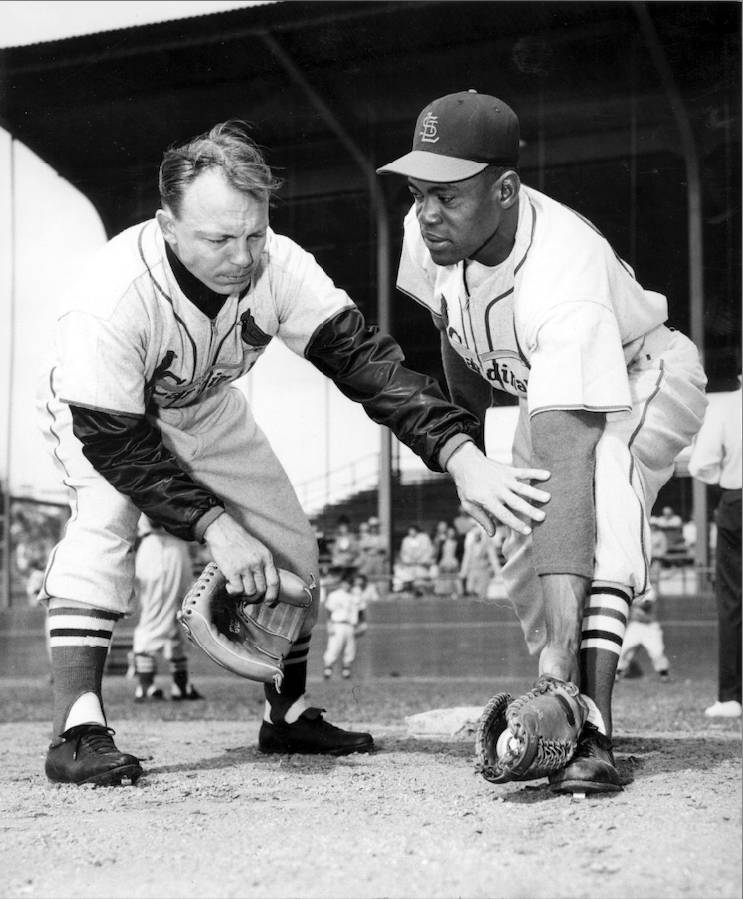 The St. Louis Cardinals’ efforts at integration began in 1953, when brewing company Anheuser-Busch bought the franchise. Company chairman August A. Busch Jr. soon realized that no black players on the field, meant very few black faces in the crowd. To remedy the situation, he hired former Negro League player Quincy Trouppe to scout players who could possibly integrate the team. Baseball historian Warren Corbett stated that Busch was “no civil rights crusader.” Instead, his intentions were primarily capitalistic, and he wanted to sell beer to everyone regardless of race. More black fans would mean more sales.

One of the more than a dozen players Trouppe signed was a 6’5” first baseman from North Carolina named Thomas Edison Alston. Alston was born on January 31, 1926 and had grown up in Greensboro. He developed an early love for baseball but since segregated Dudley High School had no team, Alston didn’t begin playing organized baseball until he joined the Navy in 1944. Released from service in 1947, he enrolled at North Carolina A. & T. in Greensboro and graduated in 1951 with a degree in physical education.

While in school, Tom Alston began playing semi-pro baseball with the Goshen Red Wings, a traveling black team based in Greensboro. That lead to an offer to play with the barnstorming Jacksonville Eagles from Florida. From there, Alston’s promising baseball career took him to an independent team in Saskatchewan, Canada and eventually minor league baseball in 1952. That season he played for Porterville, California in the Southwestern International League and batted .353.

When Trouppe discovered Alston, he was playing for San Diego in the Pacific Coast League. In his second season with the Padres, Alston hit .297 with 207 hits, 101 RBIs and 23 homeruns. He appeared primed for major league stardom. The Cardinals apparently had the same assessment of his potential and paid $100,000 and gave four players for his contract. By comparison, San Diego had purchased his contract from financially-struggling Porterville for $100. At the signing at the Beverly Hills Hotel on Jan. 27, 1954, Alston stated, “I have been hoping that it would happen, hoping and waiting, and now it’s a wonderful feeling to know the dream has come true.”

In The Sporting News, St. Louis owner August Busch Jr. stated, “When we purchased the Cardinals, I promised there would be no racial discrimination. However, Alston was not purchased because of his race. Our scouts and manager Eddie Stanky believe he is a great prospect. While he may need more experience, we didn’t want him to slip away from us.”

Alston played well in spring training and made his debut in St. Louis on Opening Day in 1954. Overall, his first season with the Cardinals was moderately successful and he hit .246 with 34 RBIs in 66 games. One of the highlights was a doubleheader against the New York Giants on May 2 in which Alston was 5-for-6 with five RBIs, an inside-the-park home run as well as three bases on balls.

Alston soon began to struggle, however. Complaining of constant fatigue and vertigo, he spent most of the next two seasons in the minor leagues with only short stints in St. Louis. Alston’s behavior also became increasingly erratic–he reportedly heard voices–and the club sent him to a psychiatrist a few weeks into the 1957 season. The Cardinals wanted him to stay in St. Louis for treatment but Alston decided to go home to North Carolina. He had appeared in 91 big-league games but would never return to baseball.

Unfortunately, Alston’s career was sidelined by mental illness and he never reached the potential many believed he had. Some blamed the expectations put on him as a bonus player who had cost so much as well as the pressures of being a racial pioneer as the cause of his illness. Whatever the cause, Alston ultimately spent several years in state psychiatric hospitals after being arrested for arson and being declared schizophrenic. He was released in 1969 but he still struggled; he never held a steady job and lived on disability benefits.

Former St. Louis Cardinal-turned-television-personality Joe Garagiola discovered Alston’s plight in 1990. He arranged for an organization that offers assistance to former baseball players to provide Alston with financial help. Because of Garagiola, the Cardinals also invited Alston to throw out the first pitch at a game in St. Louis against the Chicago Cubs in June of 1990. There, his place in team history was finally acknowledged before a cheering crowd.

Tom Alston died in Winston-Salem, North Carolina in 1993 at age 67. He is buried in the cemetery behind New Goshen United Methodist Church off Randleman Road in Greensboro, just a few yards from the baseball field where his dreams began.