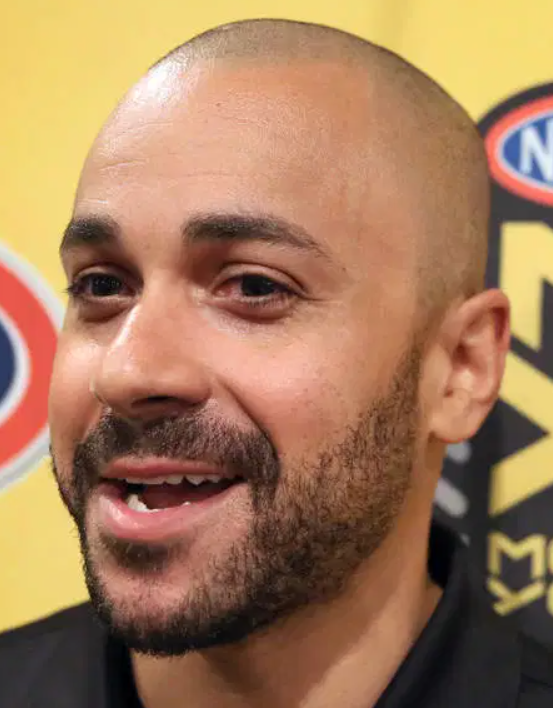 J. R. Todd, a leading drag racer and crew chief, was the first African American to win a Top Fuel competition sponsored by the National Hot Rod Association.  He was born Mario Luther Todd Jr. in Lawrenceburg, Indiana on December 16, 1981 to Mario Luther Todd, Sr., a city construction coordinator and former motorcycle racer, and Kimberly Lynn Todd.  At a very young age, he rode four-wheelers and dirt bikes. Idolizing his father, who suffered injuries from motorcycle racing, he discouraged his son’s interest in the sport. Nonetheless, Todd retained an interest in automobile mechanics and junior dragster racing, thus obtaining his Top Fuel dragster license one week after graduating from Lawrenceburg High School. Todd, who stands just 5’6,” soon began entering national competitions, but by the end of his first season, his team lost sponsorship funding.

For the next five years, Todd worked on several crew teams until a fortuitous test drive gave him his next opportunity to race in the Top Fuel class. He experienced his first major victory as a professional driver at the 2006 Mopar Mile-High Nationals in Denver, Colorado and became the first African American to win an event of the National Hot Rod Association (NHRA). He finished the year with additional wins at Fram-Autolite in Sonoma, California and Torco Racing Fuels in Richmond, Virginia.  Because of his success, he was named NHRA Rookie of the Year. In 2007, he won a race at Carquest in Pomona, California and O’Reilly Spring Nationals in Houston, Texas.  In 2008, he claimed a victory at O’Reilly Super Start Batteries in Dallas, Texas. Despite his numerous victories, Todd encountered persistent problems of securing sponsorship. For the next six years, he raced in 16 events and lost each one.

Fortunately, in 2014, drag racing legend Connie Kalitta asked Todd to drive one of his Top Fuel racers for his Ypsilanti, Michigan-based Kalitta Motorsports team.  As a result, Todd won eight more races over the next three years including races at Mopar Mile High in Denver, NHRA Northwest in Seattle, Toyota NHRA in Sonoma, and Chevrolet Performance in Clermont, Tennessee. In 2017, Todd began racing Funny Car — a dragster with tilt-up carbon fiber or fiberglass body and customized chassis — for Kalitta Motorsports and quickly established himself as a top-ranked driver in this class.

While African Americans had not achieved as much success competing in NASCAR (National Association for Stock Car Auto Racing), Todd asserted that NHRA had “always been at the front of diversity in motorsports.” He continues to race with Kalitta Motorsports and resides in Indianapolis, Indiana.

Mike Lopresti, “The Interview Issue: J. R. Todd” at https://www.ibj.com/articles/60508-the-interview-issue-jr-todd; Brendan Marks, “NHRA’s J.R. Todd Back, on Top Thanks to Perseverance – and Sport’s History of Diversity” at https://www.charlotteobserver.com/sports/nascar-auto-racing/thatsracin/national-hot-rod-association/article173320776.html; Black Dragracers.com at http://www.blackdragracers.com/race_coverage_vol3_iss3.html.