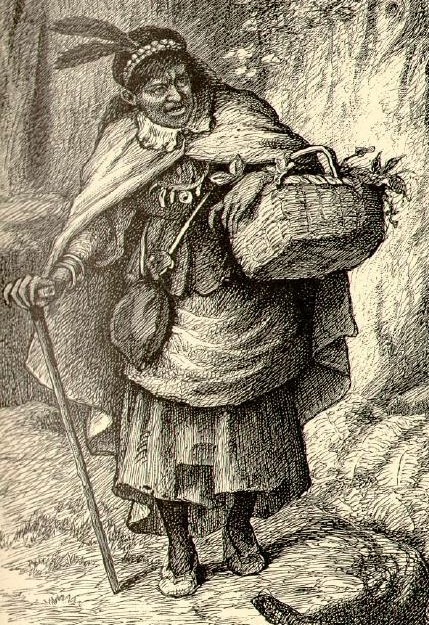 Tituba was a slave in Salem, Massachusetts and was one of the first people persecuted in the Salem Witch Trials between 1691 and 1692. Many specifics about her life are unknown, and the historical accounts about her are often contradictory. She is believed to have been from the West Indies. Ethnically, she has been described as Native American, half Native American, Native West Indian, half black, and black. Her owner, a Barbadian pastor and former merchant named Samuel Parris, who took a job in the village church, brought her to Salem in 1689.

According to the legend, one day in late 1691, Parris’s young daughter Betty, his niece Abigail, and two neighbor girls gathered to use an old English divination method to try and tell their fortunes with an egg yolk. Rather than seeing images of lovers in the egg yolk, they allegedly saw coffins, soon turned hysterical, and began barking like dogs. Betty and the other girls babbled to themselves and reported feeling they were being repeatedly pinched.

Gravely concerned about the girls, Parris contacted his fellow pastors and initiated prayer and fasting. Unknown to Parris, one neighbor girl’s mother, Mary Sibley, spoke to Tituba and another Parris slave named Indian John about the egg yolk incident. It was then that Tituba and Indian John reportedly made a “witchcake” to remedy the girls’ “possession.” The witchcake, made of young Betty’s urine and rye meal, was fed to the family dog in the hopes of divining the identity of those possessing the girls.

When Parris heard about Tituba’s use of a “witchcake” he became livid, beating and torturing her and insisting that she confess to witchcraft. Betty also accused Tituba and two other women, Sarah Osborne and Sarah Good, of bewitching her and the other girls. Tituba “confessed” and was formally interrogated in February and March of 1692. In her confession, Tituba described signing the “devil’s book” and being instructed by animals to harm the children. Tituba also implicated Sarah Osborne and Sarah Good in the incident. Tituba was imprisoned in a Boston jail for over a year before an anonymous person posted bail for her. Little is known of her life or whereabouts after her release from prison.

Tituba’s confession sparked the town-wide hysteria that would soon become the Salem Witch Trials. In this two year period, 144 people were charged with sorcery including 19 people (mostly women) who were killed after being accused of witchcraft. Some historical accounts of the case suggest that Tituba was personally experienced with African sorcery, voodoo, or other magic because of her Caribbean origins, while others suggest that she was perhaps simply superstitious, or not associated with the supernatural at all.

Although there was never any proof of Tituba practicing witchcraft, she is arguably the most popularized historical figure from the Trials, with many authors taking wide creative license with the hazy facts of her life. She has been the subject of numerous books and articles, and served as the inspiration of a character in Arthur Miller’s classic play, The Crucible, which was based on the Salem Witch Trials.

Stacey Pamela Patton, “Tituba,” Encyclopedia of African American
History, 1619-1895: From the Colonial Period to the Age of Frederick
Douglass