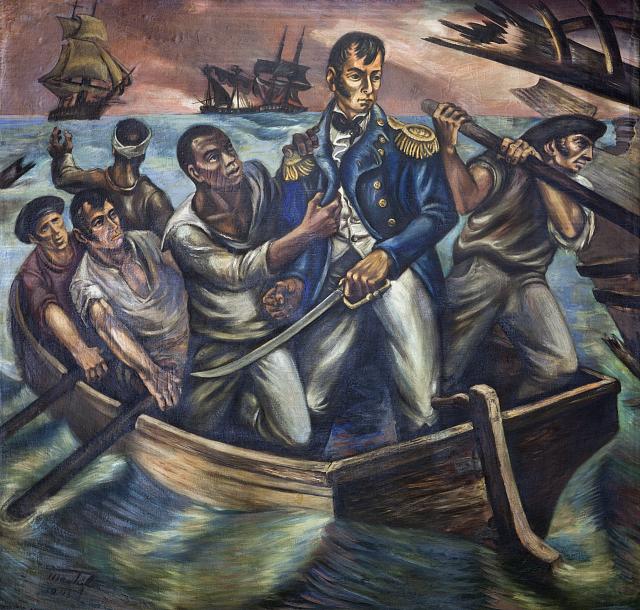 It is presumed that Silas or Cyrus Tiffany, an African American, was the son of Nathan Tiffany and Sarah Harvey and was born in 1738.  Little is known of Cyrus Tiffany’s early life.  Historic references show that Tiffany was a Revolutionary War Fifer, perhaps as one of the members of the 1st Rhode Island Regiment where enlistment provided complete freedom to those formerly enslaved.

Census documents place Tiffany in Taunton, Bristol County, Massachusetts in 1790 and there again in 1810 and show that he collected a Revolutionary War pension. Charles Atwood writes of Cyrus being a “notable and respected resident of Taunton” who “owned and resided in a small cottage in Town with a wife and son.”

It is in Taunton that Cyrus forged a relationship with the Hero of the Battle of Lake Erie, Oliver Hazard Perry.  At the beginning of the War of 1812, both British and American forces fought for control of the Great Lakes. The first major engagement in that campaign came at Put-In-Bay, Ohio on September 10, 1813. There the United States Lake Erie Squadron of nine vessels commanded by Master Commandant Oliver H. Perry confronted a much larger British naval force led by Commander Robert H. Barclay.

In the ensuing battle, Perry ordered Tiffany, one of his most trusted sailors, to prevent other frightened sailors of Perry’s flagship, the brig USS Lawrence, from fleeing below deck in the heat of the battle. Tiffany, armed with a musket, positioned himself just inside the entrance of the ship’s passageway to block would-be shirkers.

The USS Lawrence sustained irreparable damage and—with over 80% of her crew injured from British cannon—began to sink. Perry abandoned his flagship, transferring his flag and command to the USS Niagara, the only other brig in the flotilla.  He chose four trusted sailors to row across the half-mile distance to the Niagara from his damaged flagship. One of the sailors was Cyrus Tiffany who used his body to protect Perry from the heavy, sustained gunfire and musketry of nearby British vessels. Once on the USS Niagara Perry rallied his men and defeated the British naval forces. In doing so he became a hero of the War of 1812. This battle was the first time in history that an entire British naval squadron had surrendered.

Cyrus Tiffany accompanied Oliver Perry in his triumphant post-victory tour around New England and the Mid-Atlantic States. After the War of 1812 ended Tiffany continued to sail with Perry. He died aboard the Perry-commanded USS Java in 1818 and was buried at sea.  His wife died in 1830; his son expired in 1821. Their graves are found in Taunton, Massachusetts.