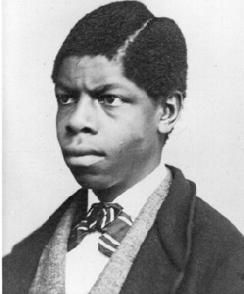 Theophilus Augustus Thompson was one of the first notable African American chess players. Thompson was born into slavery in Frederick, Maryland on April 21, 1855. Freed after the Civil War, he worked as a house servant in Carroll County, Maryland from 1868 to 1870.

Returning to Frederick, Thompson soon became involved in the chess scene. He watched his first chess game in April 1872. One of the players in the game was John K. Hanshew, publisher of The Maryland Chess Review. Hanshew loaned the interested Thompson a chess board and gave him selected chess problems to solve.

Before long, Thompson was publishing his own chess problems in The Dubuque Chess Review. His new-found skills in the game also allowed him to compete against other talented players. Most records of his playing career are unclear, but it is known that he was invited to a tournament in Chicago at some point.

Thompson’s most famous legacy was his book, Chess Problems: Either to Play and Mate, or Compel Self-mate in Four Moves. Published in 1873, the book was a compilation of chess endgame positions, puzzles which covered the final moves of chess games. Thompson’s book was reviewed favorably in The City of London Chess Magazine in July 1874.

Details about Thompson’s later life and his date of death are unknown.