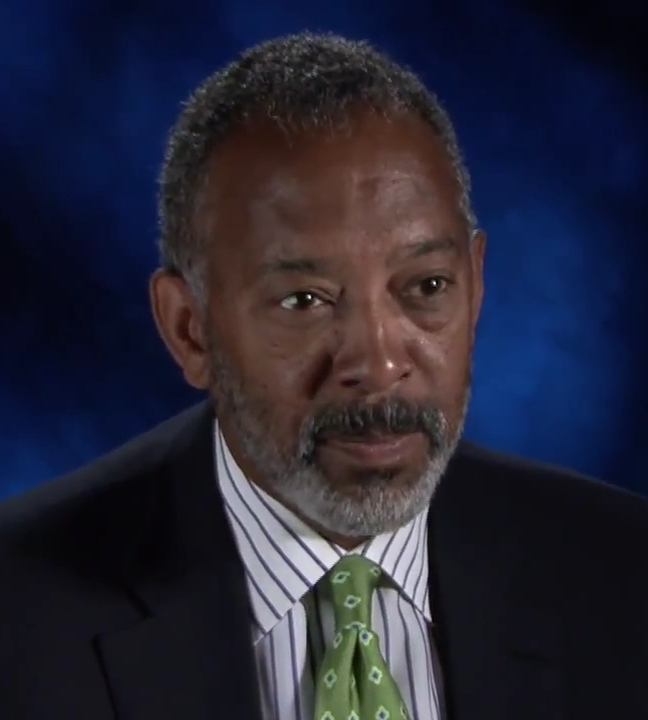 Born April 24, 1949, to working-class parents in Fort Dix, New Jersey, John Wendell Thompson climbed the high-tech world’s business ranks from entry level sales to executive positions at International Business Machines Corporation (IBM) and Symantec Corporation for a combined forty years. In 2014 however he became only the second chairman of the board at Microsoft Corporation, replacing the corporation’s co-founder, William Henry “Bill” Gates III. Thompson’s rise was even more remarkable, given that only a handful of tech industry CEOs are African American and only 1.5 percent of high-tech employees are African American.

Raised by his postal-worker father John H. Thompson, an Army veteran, and mother Eunice Thompson, a teacher, John was introduced to the business world at age ten, cutting lawns and helping his father collect rents on family-owned apartments in West Palm Beach, Florida. Attending John F. Kennedy High School in Riviera Beach, Florida, he became a talented clarinet and saxophone player and earned a scholarship in 1967 to play in the band at Lincoln University in Jefferson City, Missouri, a historically black college and university (HBCU).

His commitments to playing in the marching band, the woodwind ensemble, and the concert orchestra, however, conflicted with his passion for business. Learning later that his scholarship was conditional on majoring in music, Thompson transferred in 1968 to Florida Agricultural and Mechanical University (FAMU), an HBCU in Tallahassee, Florida. Ironically, at FAMU, internationally known for its trendsetting marching band, he abandoned his interest in music and majored in business administration.  He also married at nineteen and became a father.

After Thompson graduated with a bachelor of arts degree in 1971, he joined IBM as a sales representative, planning to work a couple of years before heading to law school, when he and his wife had a second child. Instead he remained at IBM for the next twenty-six years. Between 1975 and 1997, he took a series of management positions that included branch office manager, assistant to regional manager, regional marketing director, assistant to the CEO and the chairman, director of IBM’s Midwest operations, general manager of personal software products, and general manager of IBM Americas. During those years, he also earned a master’s of science at the Massachusetts Institute of Technology’s Sloan School of Management in 1983, and divorced. In 1998 he married his second wife Sandi, an attorney. They have two grown children from his first marriage, a son and a daughter.

In 1999 just two years shy of a thirty-year retirement, Thompson left IBM to join Symantec Corporation, a floundering security software firm. As chairman, president, and CEO, Thompson transformed the company into a multibillion-dollar world leader in Internet security products, including its popular Norton computer security software packages. Thompson retired in 2009 but remained on the board. That year, he was also awarded the “David Packard Medal of Achievement” from Tech America Foundation for his contributions to the high-tech industry.

After retirement from Symantec, the sixty-year-old executive joined the board of directors of Virtual Instruments in 2009 but stepped in as CEO in 2010. He resigned from Virtual Instruments in 2011. One year later, he was presented the “Spirit of Silicon Valley Lifetime Achievement” award by the Silicon Valley Leadership Group. Thompson joined the Microsoft board of directors in 2012, two years prior to being tapped as chairman of the board. In 2015 Black Entertainment Television (BET) presented Thompson the “Technology and Business Award,” spotlighting his outstanding achievements.