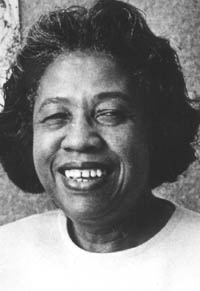 Era Bell Thompson was an author, editor and a pioneering female African American journalist.  She was born in Des Moines, Iowa.  When she was eight years old her family moved to North Dakota.  Her father worked various jobs including farmer, messenger to the governor and shop keeper.  In 1925 at the age of nineteen, Thompson enrolled at the University of North Dakota.   While she was attending UND, Thompson excelled as a writer and began working for the campus newspaper.  She also excelled as an athlete where she established several university track records.  Two years after enrolling at the University of North Dakota Thompson was forced to drop out due to health problems.  She later moved to Sioux City, South Dakota and earned her Bachelor of Arts degree from Morningside College.

In 1933 Thompson moved to Chicago. Though college educated, she was forced to work as a house keeper. She would eventually publish a newspaper for a Works Progress Administration (WPA).  While working for the WPA Thompson conducted post graduate studies at Northwestern University’s Medill School of Journalism.

In 1945 Thompson she received a fellowship to write her autobiography, American Daughter, which was released the following year.  American Daughter recalled her childhood in North Dakota.  Thompson then joined the Johnson Publishing Company in Chicago and worked as an associate editor of its publication, Negro Digest.  She later worked as a managing editor for Ebony the leading magazine of that publishing house.  Thompson continued to work for Ebony in various capacities until her death in 1986.

Thompson traveled around the world in search of stories during her years with Johnson Publishing.  Often she interviewed hundreds of people for months before committing their stories to paper.  After touring eighteen different African countries in 1954, Thompson released Africa, Land of My Father.

By the end of her life, Thompson had received numerous awards and accolades for her life’s work.  She was praised for her efforts in promoting both racial and gender understanding while undermining pre-existing racial and gender biases. Era Bell Thompson died in Chicago in 1986.