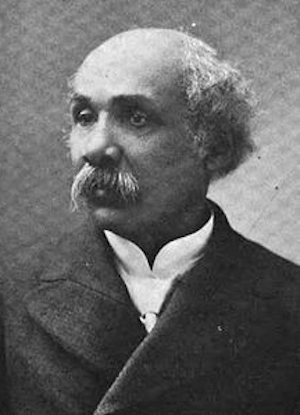 William Hannibal Thomas was born in Pickaway County, Ohio, on May 4, 1843 to free black parents.  During his early childhood Thomas’s family moved frequently in search of economic advancement before returning to Ohio in 1857.  As a teenager Thomas performed manual labor, attended school briefly, and broke the color line by entering Otterbein University in 1859.  Thomas’s matriculation at the school sparked a race riot and he withdrew.  Denied entry to the Union Army in 1861 because of his race, Thomas served briefly as principal of Union Seminary Institute, a manual training school near Columbus, Ohio.

After twenty-two months’ service as a servant in two white Union regiments, in 1863 Thomas enlisted in Ohio’s first all-black military unit, the 127th Ohio Volunteer Infantry.  Appointed sergeant, he became a decorated combat solider.  At Fort Fisher, North Carolina, in February 1865 Thomas received a gunshot wound in the right arm that resulted in its amputation.  He suffered pain and medical complications from this wound for the remainder of his life.

During the post-war decades Thomas resided in Pennsylvania, Ohio, Georgia, South Carolina, and Massachusetts.  After attending divinity school, he worked as a journalist, teacher, theologian, lawyer, militia officer, trial justice, and elected official.  In 1878 the State Department appointed Thomas consul to Portuguese Southwest Africa.  In these years the peripatetic Thomas repeatedly faced allegations of financial and moral improprieties from church, state, and local officials.  In 1886 he launched the short-lived magazine The Negro.  Four years later Thomas published Land and Education, a monograph that urged blacks to reform themselves through prayer, improved moral values, education, and land acquisition.

Thomas is best known for The American Negro (1901), a bombastic book that censured blacks, especially women and clergymen, as immoral, irresponsible, and destined to fail. Thomas differentiated between mulattoes like himself, whom he considered superior, and Negroes, whom he judged to be hopelessly depraved.  Few contemporary white critics denounced African Americans with as much crude rhetoric as Thomas employed in The American Negro.

Thomas’s book catapulted him briefly on to the national stage.  White supremacists cited The American Negro as justification for the repeal of the Fifteenth Amendment.  African Americans, including Charles W. Chesnutt, W.E.B. Du Bois, and Booker T. Washington, charged Thomas with hypocrisy and sought to suppress his book.  They dubbed him “Black Judas.”

Thomas died in poverty and obscurity in Columbus, Ohio, on November 15, 1935.