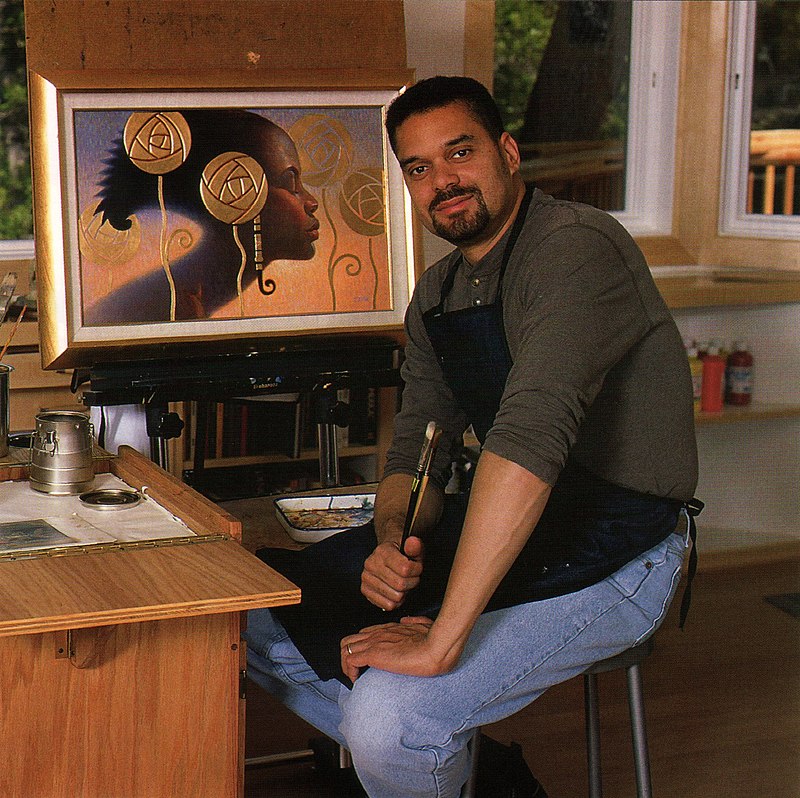 Thomas Blackshear is a renowned painter and sculptor.  Blackshear was born in Waco, Texas on November 14, 1955 to Thomas Richman Blackshear, a U.S. Air Force pilot, and his wife, whose name is unknown. Mostly raised in Atlanta, Georgia, Blackshear loved to draw.  Upon finishing high school, the Art Institute of Chicago awarded him a scholarship.  After only spending one year there, he enrolled in Chicago’s American Academy of Art and found employment at the Hallmark Card Company in Kansas City, Missouri.  He apprenticed under noted American illustrator Mark English. In 1977, Blackshear graduated and, in 1982 after a short stint as head illustrator for Godbold/ Richter Studio, a Kansas City firm, he launched his career as a freelance artist.

Blackshear’s career spanned a wide array of artistic expression. His early production included more than 140 illustrations for Anheuser-Busch, Lucasfilm (Star Wars and Star Trek movies), Universal Studios, Paramount Pictures, Smirnoff Vodka, 7-Up, Coca-Cola, The Walt Disney Company, National Geographic, and the Milton Bradley Company.  In the early 1990s, he was contacted by fellow black illustrator Jerry Pinkney to work on stamp portraits in the Black Heritage series issued by the U.S. Postal Service. The series premiered in 1992 at the Smithsonian’s National Museum of American History and later exhibited across the nation. The majority of these stamp portraits featured distinguished African Americans such as James Weldon Johnson, Dorothy Height, and Ida B. Wells-Barnett. He also completed a Jazz Series and commemorative stamps for actor James Cagney and classic Hollywood movies that included Stagecoach, The Wizard of Oz, Gone With the Wind, and Beau Geste.  In addition, the Hamilton Group commissioned him to do four scenes for collector plates.

With a relentless work ethic, Blackshear boasted an impressive number of artworks but his personal life suffered. When his parents divorced, he felt adrift and lonely. He turned to his religious faith to lift himself out of depression and reconnected with Ami Beth Smith, a college friend that he later married. Well-known and highly respected in the religious art world, Blackshear’s colorful, emotion-infused paintings of Christ and other Biblical figures enhanced the interior walls of numerous churches. Since the mid-1990s, he created a profitable venture known as the “Ebony Visions” project. This large and varied collection of skillfully painted religious and historical figurines humanized African Americans.  In 2000, he expanded his celebration of black life figurines with the collection, “The Blackshear Jamboree Parade,” centered on youthful enjoyments. Other themed collections followed reflecting religious praise and often whimsical, romanticized renderings of common folk appreciating everyday events.

Because of his success, Blackshear has lectured and conducted workshops in Germany and Sweden and taught for three semesters at the San Francisco Academy of Art College. In 2006, he presented his painting of Pope John Paul II at the Vatican. Among his other recognitions are the 1988 Gold Medal of the National Society of Illustrators and the 2001 International Collectible Artist of the Year Award.

The father of one son, Elisha, Blackshear resides in Colorado Springs, Colorado.