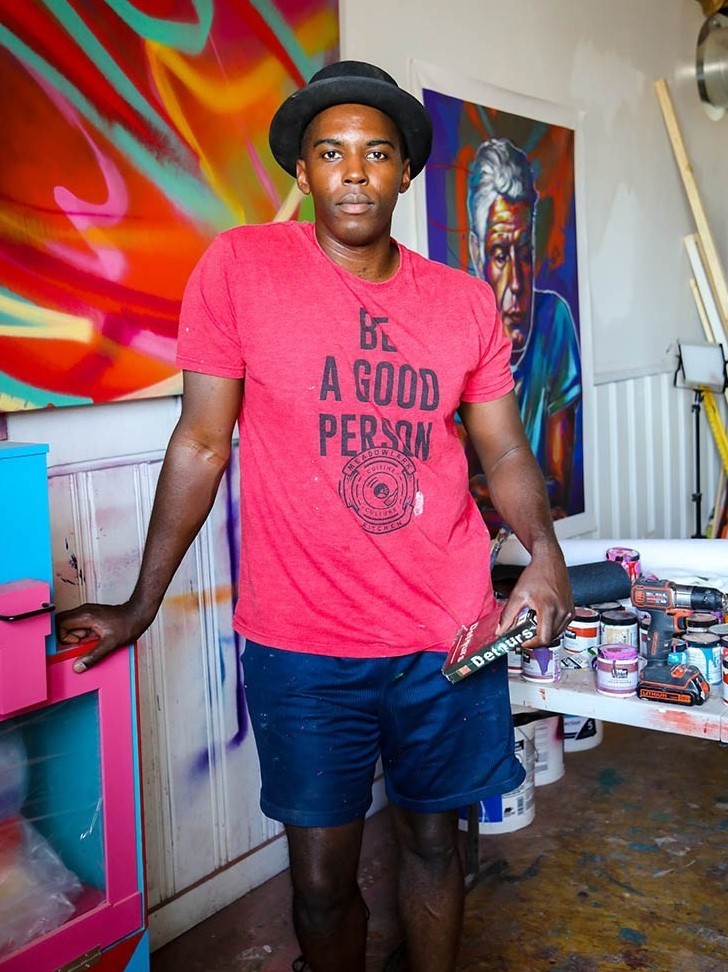 Having achieved considerable success after switching careers, Thomas “Detour” Evans has been in big demand as a muralist and portrait artist. Born December 12, 1984 in Dayton, Ohio, the son of Leroy M. Evan, an Army lieutenant colonel, Evans lived on military base on two continents before the family settled in Denver, Colorado.

An injury had prevented Evans from following his father’s path into the military. Between 2010 and 2015 he was an intern at iDE (International Development Enterprises) and CCT Advertising and then worked as events programmer and marketing coordinator at the University of Colorado, Denver Business School and as marketing manager for the non-profit Indigenous Education Foundation (IEF) in Tanzania. Work in advertising and marketing proved unfulfilling but his job at IEF allowed him to spend eight months of volunteer service in Africa where, unburdened by modern conveniences and relieved of certain expectations, he gained the confidence to take another detour (hence Detour, his adopted moniker) that changed the trajectory of his professional life. He resolved to dedicate himself to his art.

In 2011, Evans had his first solo show at The Belmont by Reside in Chicago followed in 2012 by solo shows in Denver at RedLine Gallery and Denver Center for the Performing Arts Complex. More solo shows and group shows followed mainly in Denver (Helikon Gallery, The Republic Plaza, and City Hall) but also in New Orleans and Milwaukee. Evans painted murals in Buenos Aires, Argentina, and Monduli, Tanzania.

A proponent of live, participatory, politically progressive community art, in 2017 Evans was artist-in-residence at the Denver Art Museum and in 2018 artist-in-residence in France at La Napoule Art Foundation. A published author, his book is Be the Artist: The Interactive Guide to a Lasting Art Career was released in 2020.