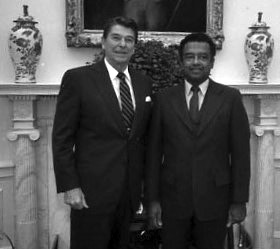 Thomas began his undergraduate studies at the University of Nebraska at Lincoln in Lincoln, Nebraska. He transferred to Harvard University in Cambridge, Massachusetts, and finished his Bachelor of Science degree there in 1951. He obtained his M.A. in 1966 from George Washington University in Washington, D.C., and his Ph.D. in 1973 from Yale University in New Haven, Connecticut.

From 1966 to 1967, Thomas served as Prairie View A&M’s NROTC Unit’s Executive Officer in Prairie View, Texas. For the following two years (1967-1969) he remained at Prairie View as Professor of Naval Science. While completing his Ph.D. coursework, Thomas worked with Yale University’s NROTC Unit from 1970 to 1973. Thomas was then named Commander of Destroyer Squadron Nine from 1973 to 1974. He held the same position with Cruiser Destroyer Group Five from 1974 to 1976. For the next two years (1976-1978) Thomas was Director of the Near East and South Asia Region of the Office of the Assistant Secretary of Defence. He finished his distinguished naval career as the Commander of Training Command of the Pacific Fleet from 1978 to 1981.

On December 1, 1981, President Reagan nominated Gerald E. Thomas as the United States Ambassador to Guyana. After U.S. Senate confirmation Thomas presented his credentials on February 18, 1982. He headed the U.S. Embassy in Georgetown, the capital of Guyana, until September 6, 1983. The following month on October 7, 1983, President Reagan once again nominated Thomas as ambassador. His appointment this time was to Kenya. Given his credentials on November 9, 1983, he arrived in Nairobi, the capital a short time later.  His tenure as U.S. Ambassador to Kenya ended on September 29, 1989.