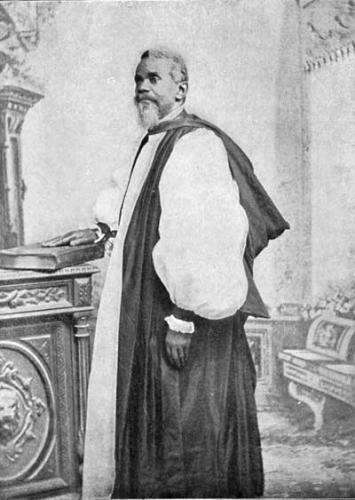 James Theodore Holly emigrationist, missionary, and bishop, was born in Washington, D.C on October 3, 1829. At age fourteen his family relocated to Brooklyn, New York. His father taught him the shoemaking trade. Then in 1848 he began working as an abolitionist with Lewis Tappan, one of the nation’s leading anti-slavery activists. In 1850 Holly and his brother Joseph opened their own boot making shop.

In 1851, James and Charlotte Holly were married in New York but they soon moved to Windsor, Canada, just across the border from Detroit. The Hollys remained in Windsor until 1854. While there James Holly helped former slave Henry Bibb edit his newspaper, Voice of the Fugitive. Holly also endorsed the Refugee Home Society and organized the Amherstburg Convention of free blacks in Canada.

Before leaving for Canada, Holly had joined the Protestant Episcopal Church. He became a church deacon in 1855 then in the following year a priest. Even as he continued his religious activities, Holly was drawn toward emigration, believing that African Americans had no future in the United States. In 1854 he was a delegate to the first Emigration Convention in Cleveland. The next year he represented the National Emigration Board as commissioner.

In 1856 Holly returned to the United States, settling in New Haven, Connecticut where he was the priest of St. Luke’s Church and teacher in public and private schools until 1861.

Holly now promoted black emigration to Haiti and made that argument in a series of lectures that were published in 1857 as Vindication of the Capacity of the Negro Race for Self Governance and Civilized Progress.

In 1859 Holly corresponded with U.S. Congressman Francis P. Blair about getting government aid for emigration. He also lobbied the Board of Missions of the Episcopal to finance his journey to Haiti. Holly did not inform the Board that he planned to take emigrants to Haiti on his trip.

Then in 1861 Holly led 110 men, women and children from New Haven to Haiti. Holly’s first year in Haiti was full of personal challenges. His mother, wife, two children, and thirty-nine other members of his group died of yellow fever and malaria. In 1862 Holly had become a Haitian citizen but returned to the United States hoping for financial support to establish a mission station. His request was denied but in 1865 the Board of Missions of the Protestant Episcopal Church accepted sponsorship of Holly’s mission in Haiti. In 1874 he was consecrated missionary bishop of Haiti at Grace Church New York City, becoming the first African American Bishop in the Episcopal Church. In 1878 he was recognized as bishop of the Orthodox Apostolic Church of Haiti. Holly eventually remarried. He and his new wife, Sarah Henley, had nine children.